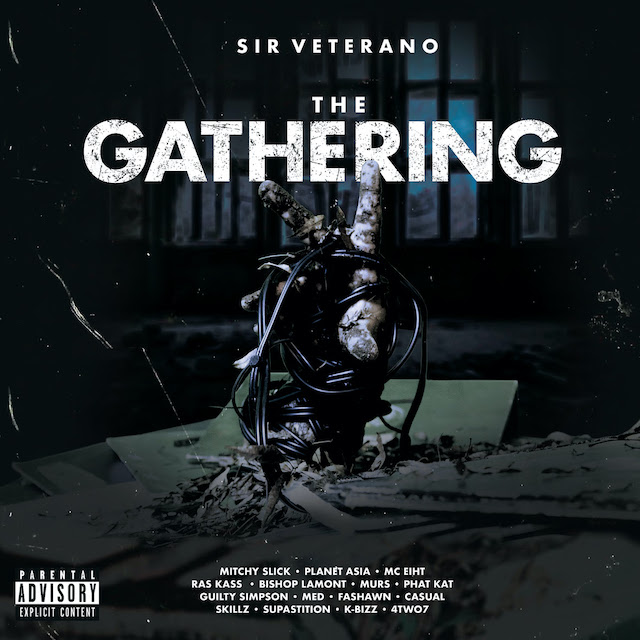 California producer Sir Veterano presents The Gathering, his new album featuring MC Eiht, Planet Asia and Mitchy Slick on lead single “Reputable” (watch the music video) as well as appearances from Murs, Bishop Lamont, Casual, Ras Kass, Guilty Simpson, Phat Kat, Fashawn, K-Bizz, 4TWO7, M.E.D., Skillz and Supastition. Growing up outside of San Francisco, Veterano worked with Ras Kass, Kool G Rap, Mad Skillz, Planet Asia and Slaughtahouse through the mid-2000s and early 2010s, releasing the Latest and Greatest Vol.1 mixtape, a doo-wop themed instrumental album in partnership with Dart Adam’s Producers I Know brand, and a DJ series of West Coast funk with 2DopeBoyz.com, before putting his career on hold in order to focus on his personal life. In late 2018, Sir Veterano expressed interest in rejoining the music business to his music manager, Walt Liquor – aka 4Two7 – and Kwa Nguyen, owner of Fresh Yard Clothing and Fresh Yard Records. The “Reputable” music video was directed by Yellow Nguyen, the man behind videos for Schoolboy Q and Ab-Soul. “I feel like I’ve been buried in a coffin for the last decade and just woke up,” Veterano says regarding his new project. “Dug myself out of my music grave and started walking around. The Gathering is a summoning of old colleagues and Hip-Hop legends to come together and do the lyrical maiming they’re known for.” The Gathering is out now on Fresh Yard Records.