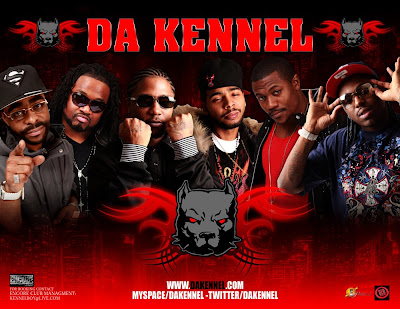 Po: Thanks for stopping by Po Politickin. How’s the hip hop scene in Akron, Ohio?

Da Kennel: Well the hip hop scene in Akron OH, is like any other place just smaller ad less people but hella talent!

Po: How do yall feel about Bron Bron leaving?

Da Kennel: like lebron we are from Akron and we are battling our own hometown
for recognition he was doing the same with no results we coming to south beach
bron go heat

Po: I read that yall raised pet pit bulls together, is this where the name Da Kennel originated?

Da Kennel: Yes we raised pitbulls together I am still currently raising them and we where raw dog at first but we switched up when we
had so many pitts and people to da kennel

Po: Da Kennel is nine man group compiled of 6 rappers and 3 in house producers. Could you tell more about this?

Da Kennel: Well its like you said 6 rappers 3 producers we’re more than just a group we are a movement we do it all Rap, R&B, Rock, Hip Hop Period!

Po: How does each member of team bring to the table?

Da Kennel: Everybodys different got they own swag on style to form this kennel movement

Po: Your crew is drawing comparisons to rap groups such as St. Lunatics, Wu Tang, and Slaughterhouse? What’s your opinion on this?

Da Kennel: That’s cool I love to be compared to people like that they still heavy in the game and we plan to leave a mark like them!

Po: What would you say is the overall theme in your music?

Da Kennel: Overall them of our music is The Truth about life and things everyone can relate to from rich to poor, young & old!!

Po: I noticed you just release a new mixtape called “Hood II Hood”. Could you tell about the mixtape?

Da Kennel: Hood II Hood is jus about daily life in the hoods of America and what they don’t say or mention on TV or Radio we bring it to the table!

Po: Are you working on any other projects?

Da Kennel: yes we currently have “hood 2 hood 2” reloaded another mixtape and we got the actual album coming that’s gonna change the industry..

Po: What advice would you give to aspiring artist?

Da Kennel: I would tell aspiring artists to prepare themselves for better and for worse like a marriage everything isn’t what t.v makes it out to be

Po: Thanks for stopping by Po Politickin, any words for your fans and
supporters?

Da Kennel: First and for most we thank and love ya’ll for the support across the world and we promise we won’t disappoint follow us to the top

Da Kennel – Look What The Block Made