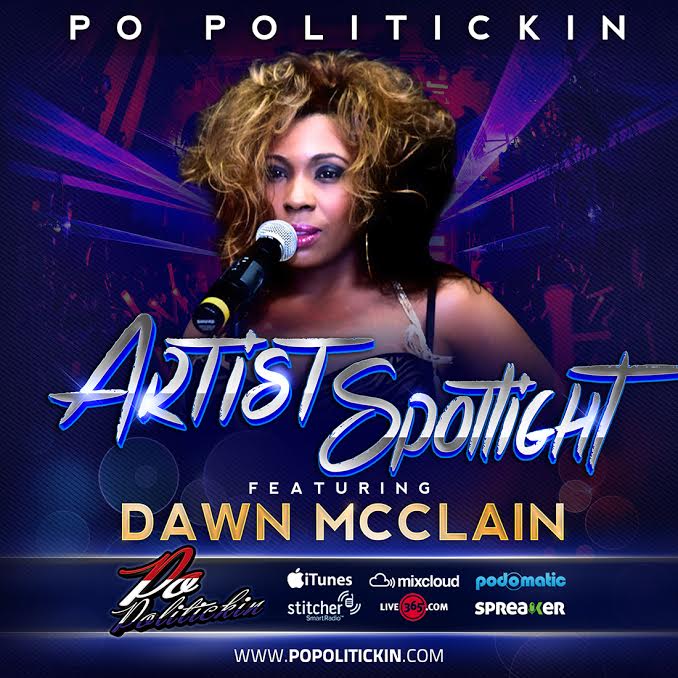 Hailing from Los Angeles, California, Dawn McClain has emerged from the same rich soil of so many other great African American singers. Like so many powerhouses and trailblazers in music, Dawn began singing in the church at a very early age. An 80’s baby with a splash of 60’s and 70’s influence, and a sprinkle of gospel roots, she blends and bridges the generation gap between these eras in music, melodically suspending time.

Ms. McClain is a Veteran of the United States Air Force, and a natural humanitarian and advocate for women’s health and cancer awareness. Dawn was diagnosed in 2010 with ovarian cancer. Never one to faultier she embraced cancer with GOD’s grace and has been in remission now for four years.

Dawn McClain calls the show she gives “The Experience”, because it is just “that” an Experience. If you ask her, how she would like to live out the rest of her days… She would say, “Performing”. There is nothing that she loves more than the opportunity to interact with her supporters. In “The Experience”, she gives you all the passion her heart can give, by filling the room with and bathing the crowd in the essence of song. Music with passion and force, sensuality and jazz, bluesy rock-steady R&B, funk and futuristic soul…that is, “classic soul groove gumbo”. Your ears will be tantalized with the vocal influences of her mentors, Patti LaBelle, Chaka Khan, Rachelle Ferrell, Jill Scott, and Ledisi.

Ms. McClain’s career thus far has been a journey filled with “rare” opportunity for a independent artist. She calls it a blessing and God’s grace, that her projects (“The Love Project”, “Dance Chronicles”, and her most resent release “Life is Beautiful” ) were touched with production and co-writing collaborations, from some of the industry’s most sought after Grammy nominated writers and producers. She has graced the stage and performed with Industry legends such as Roberta Flack, Jeane Carne, Ann Nesby, Kem, Gordon Chambers, Tony Terry, Mint Condition, K-Ci & Jo-Jo, Stevie Wonder, N’ Dambi Blu, Liv Warfield, Lela James, Erykah Badu, Donnie, Frank McComb, Johnny Gill, Malcom Jamal Warner, and Chrisette Michele. She has been featured on Good Day Atlanta, V-103’s “Art and Jazz”, 102.5’s “Art & Soul” Summer Music Series, Centennial Olympic Park’s “Wind down Wednesdays, Amateur Night at the Apollo (and won), and the highly acclaimed Michael Baisden Show.

When asked what was her inspiration for the record she states, ” I wanted to write something controversial, something no other female performer/writer in this day and age was brave enough to write about. “Can’t Call it Love” is about a woman who is with this man just for sex. She knows it’s wrong, she knows what’s at stake, but she doesn’t care. Although I don’t agree with creating any type of sexual relationship with a married man, I believe a lot of women have found themselves in this type of situation. I have friends who do this, I’ve listened to them explain to me why they would take such risks, and “Can’t Call it Love” is my translation of how I think they feel.”

Ms. McClain is currently doing dates, her next scheduled show “An Evening With Dawn McClain featuring Mista P Jones” is on December 6th at the JunkYard Bar & Grill in Houston, Texas. She is also working on new music and collaborating with other artist on their projects. When asked about working with Dawn McClain, Kathy Liautaud of KLPR Group stated, “Dawn McClain is a passionate, fearless, resilient artist that didn’t allow her adversaries to hinder her goals, she used it as fuel and inspiration to accomplish them. She is multi talented and a breath of fresh air to the industry; she doesn’t compromise herself to follow the popular trend. We are honored to have her on our roster”.

Dawn McClain is a brilliant, gifted and stellar talent on the rise and is destined to reach super star status and become a household name.