In the world of Hip Hop production, there is a vast sound experience that ranges from mashing up samples to pounding out original synthetic drum patterns. The producers who stand out are rarely those who rely on sampling alone – this is the day of the true artist.

Ridd and Dnali, collectively known as DNA Beats, are bringing their style of natural percussion and DJ-inspired rhythms to the forefront as they build a brilliant new soundscape for Philadelphia’s urban music scene. They have a current Mid-Atlantic hit with DJ Diamond Kuts’ “Salt Peppa Ketchup Hot Sauce” featuring Casino and Pumpkin, and a flurry of work this year with the likes of Bump J, Gillie Da Kid, Young Tre, Peedi Peedi, Five Mics and more.

Ridd and Dnali stopped by Po Politickin to discuss their musical journey so far.

Tell us a little about yourselves. How was it growing up?

Dnali: Well we both grew up in Southern, New Jersey. I am a natural born drummer. I was drummer at my church at a young age. I never got in to the whole band thing but I knew Hip Hop was for me. I started out making beats on my Sony Playstation. From there I moved to a PC program called Reason. Once I got into Reason, I just started applying a lot of music theory that I learned in school and began to mix it with my drumming skills to make music.

Ridd is a complete music dude. Ever since high school he was a DJ. From DJ not in a sense your average DJ. I mean Ridd would do house parties for our high school but he would also branch out and do weddings and bar mitzvahs. This gave him a large eclectic music knowledge. When we first met, I didn’t really know how to sample and Ridd knew nothing about the piano. So we started working together and eventually our sounds and styles turned into one and that’s how we got our sound.

I was reading that you both were students of the legendary production team “Gamble & Huff”. Can you describe that experience?

Ridd: It all started my senior year in college. I was at intern at Philadelphia International Records. For those who don’t know, that’s where groups such as Teddy Pendergrass, Patti LaBelle, The Jackson 5, Lou Rawls, McFadden and Whitehead, The O’jays, The Intruders, and The Ebonys were all signed to. As a result the label introduced to world to the Philly Sound same way Motown put on Detroit.

When Dnali and I first met and decided to do music full time (basically quit our 9-5’s), my buddy Amir Khan took my position and kept us in the loop with the labels actions. He also gave us access to a lot of their music, connections, and studio access. We were able to watch Gamble and Huff in work on several occasions as well as listen to them talk about how a lot of their songs were crafted. This taught us how important it is to keep a good work ethic. If music is something that you want to do and all you want to do, then you have to do it all the time.

Besides Gamble & Huff, which other producers are you influenced by?
Dnali: Of course some of the greats like Issac Hayes and Curtis Mayfield. As far as today, Timbaland, Scott Storch, Danja Handz, Drumma Boy, and Dre and Vidal. People may wonder about Dre and Vidal, but to us they’re some of the best producers in the game. They are so versatile. They can produce for a artist like Chris Brown and switch it up and take it hood and work with a Beanie Sigel. This is how we always wanted our sound to be. We never wanted to be placed in a box. Our sound is crazy – you may hear us produce a track for a DJ Diamond Kuts or Gillie Da Kid and then you may hear us doing a pop record with the DaCav5. Which fives rappers would you like to work with in the future?
Ridd: Well, in no specific order, Jay-Z, Lil Wayne, Fabulous, and Rick Ross and Trick Daddy. What advice would you give to aspiring producers?

Ridd: Patience! The music business is a hard business, and to be honest it’s a struggling business. If you’re not prepared to wait your turn then it’s not for you. I know a lot of kids now are just producing and selling there beats for like 10 or 15 bucks. In reality when you first start your craft the money should never be a issue. As a producer who is just starting out, you should first make beats but work with artist. You can sit on myspace all day and sell beats for $20 or $50 dollars, but the producer who spends that same time networking and giving his beats to artist in the long run will be much more successful.

Can you talk about your current projects?

Ridd: Some of our current projects now include the song “You Baby” for DaCav5, “Private Room” featuring Young Tre – he has a situation at Def Jam, so be on the look out for him. We are all over DJ Diamond Kuts album called Her-Story in the Making. She is about to do the same thing DJ Khaled did for Miami, but for the East. We’ve also done tracks for Bow Wow, Flo-Rida, Lil Mama and others.

Can you tell the readers how to contact DNA Beats? Any shout-outs?

Dnali: If you want to get in contact with us you can reach us at

www.myspace.com/dnabeats or at our home studio location in Berlin, New Jersey. We have invested a lot into our studio, and that’s where a lot of records that you hear from us on the radio were recorded at.

As far as shout outs, just a few. Status Management, they stay on their grind, DaCav5 they are a pop group we work with that are doing their numbers right now. Young Tre, Southern artist who signed with Def Jam and probably is the next big thing to happen to rap since Jeezy. And of course the young boy Casino, he is blowing up South Jersey and Philly radio right now. 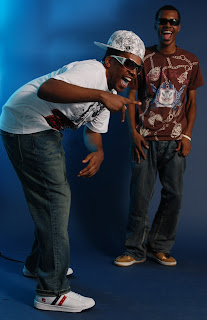