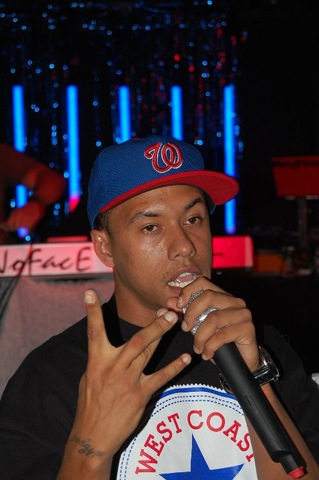 Fiziks the Great. to carry such a name brings much responsibility. Born on April 16th, 1988 in San Diego CA. the young boy grew a passion for music at a early age. Listening to all different kinds of styles from all over of the art form of hip-hop. He began to grow and develop a unique flow that has became trademark and branded as one of the most original sounds ever.Joining his high school friends on there quest they formed a group known as the loudmoufz.

Earning respect as a crew and as individual MC’s they ventured around the County (and LA) destroying rappers twice there age & sharing music with the world. After time the group fell apart leaving Fiziks to put everything he had into his own label he created Six1Nasty ent. Not long after he teamed up with other artist creating a network and movement that would take the town by storm and forever be stamped as one of the most consistent, powerful units ever to become, NO CEO. A strong circle of independent artist supporting each other together as a whole. Different Artist, producers, labels, and companies representing as there own businesses. He continued to bless the stage and give fans a unforgettable performance each time,not long until he started putting together his own shows gaining a reputation as legendary host.

Soon after that he joined some of the original creators he started the NO CEO movement with and became a part of there label Faultline ent. With his mixtape out online hosted by DJ Period titled “Fundamentals” and his compilation dropping late march 2012 His distinctive voice is noticed as soon as you hear it the way he switches it from fast to slow and smooth to raspy its something that could not be taught by any instructor to any student.

His fan base varies from all over the world, but is strongly noticed in the areas he has performed as his resume list from vegas to AZ and all across and up and down the golden state. He and his team continue to pack out venues and throw amazing functions in the san Diego area and is widely being recognized across the globe. Watch carefully and pay close attention to this guy because there is no telling what he has up his sleeve, he is unpredictable and moving at a fast pace, with the rate he is going anything can happen so stay tuned!!