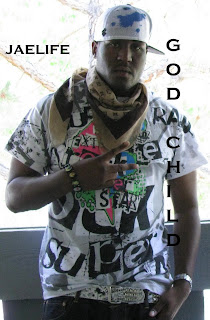 Born and raised in the streets of Compton, California, Jerell Ray also known as Jaelife, rapidly realized that hip hop music would soon become more than just an ordinary hobby. Influenced by his second oldest brother, Steven Ray, also known as, VIP, Jaelife began writing and recording his own original material. All through Jr. High and high school Jae marvelously grasped the attention of his peers with his unique and incomparable style of rap.

Understanding that music has the ability to transform one’s mind, body, and soul, Jae imparts this wonderful gift of speech and brings it to life through music. In late 2008, Jae signs with Yahweh Nation, JuuNo Entertainment (YNJ ent). With family and determination, Jaelife is definitely on the path towards bridging the gap between gospel and the mainstream music.

1. Tell us a little bit about yourself?

Well simply put Jae Life is that dude that everybody loves to chill wit. Among all my friends I that guy that keeps everybody laughing and having a good time. I like to enjoy life and truly live stress free because I know God takes care of all my worries and problems at the end of the day!

2. How was it growing up in Compton?

Growing up in Compton I experienced the most beautiful and at the same time the hardest experiences of my life! Being born and raised in Compton I got use to the environment like most individuals do growing up a lower class society. I saw and witness a lot of terrible things growing up in Compton, something an average young man shouldn’t have to experience. But gracefully I was blessed to have two hard working, God fearing parents to raise me. Because of this I never missed a meal or had to worry about wearing nice clothes because I had it all. But 6 days before my 13the birthday I lost my mother to diabetes. This crushed me as a young child but with the help of so many loving relatives and friends I got through it.. Weird thing is that all in that same year my mother died three crucial things happen that change my life forever. When I first turn 12 I gave my life to Christ and accepted him as my personal savior. A few months later my big brother introduced me to hip hop and I wrote my first rhyme, and later that year my mother died. It was like God was preparing me for my mother’s death here on earth, because now that I was saved I understood why she died and I didn’t take her death the wrong way. I was actually happy she passed on because she no longer had to suffer on this earth with her sickness. And one crucial thing that helps me get through the tuff times was my second love music. Many days I felt like crying I just picked up the pen and started to reflect those thoughts into poetry and hip hop songs.

3. How did you get started in music? Who were your musical influences?

Well like I said earlier my big brother introduced me to hip hop. And every since I was 12 I have been writing my own material. It was just one of those things that never left me all through my Jr. High and high school years. Over the years it became more than a hobby it became a passion. After I graduated from high school in 2000 was when I really decided that I wanted to pursue music as a career. Music has always been an influence in my life, plus my pops was a dj and he use to throw the live parties back in the 70’s. So I remember him spinning them old 45”s around the house, groups like the O’ jays, Temptations, Four Tops, Marvin Gaye, Smokey Robinson, James Brown and many more. But as far as Hip Hop influences go artist like Snoop, Ice Cube, Kurupt, Jay Z, Big, Nas, Big L, and Wu tang had a major impact on my development and inspired me as an artist!

4. Describe your music and how it differs from the norm?

My music is the best so everybody go buy it lol! Naw but all jokes aside my music simply put is reality with a spiritual conscious! It is different from most rap you may hear because I speak truth. And when I say truth I ant talking about truth from man’s eyes, but I’m speaking about the truth that comes for God almighty. It’s funny how everybody says they love God but so many do not speak on it! And well that’s when I step it on em’ and start speaking on it ya feel me!

5. Aside from music, what are your other hobbies?

When I’m not in the studio which is almost never! Pertaining to hobbies I love the game of basketball. I don’t’ get to play much like I would like to and use too, because I now have a three year old to look after. I am also married to a beautiful woman so my hands are pretty much tied. Matter of fact now that I think of it I don’t even know how I record half of my music lol!

6. What advice would you give to aspiring emcees?

To the emcees out there that’s trying make it in this rap game its three rules I came of wit myself that helped me out tremendously and still do to this day. Number one is first ask yourself is this really something I want to do and why. You’ll be amazed at how many people out there that just rap and they don’t even know why. Once you ask yourself why I want to be an emcee you know understand your purpose and what you as an emcee can bring to the table. Second now that you understand and have a motive go out and research everything you can about the music industry. And not just what it takes to be an artist but learn the business. The more you know the more powerful you can be in establishing a successful career. Last but not lease keep grinding baby! Don’t ever stop grinding no matter how the circumstances may seem, and don’t ever get comfortable. You gotta remember there are a million rappers out there that are all fighting for that number one spot, so as soon as you relax you leave opportunity for the next man to take ya spot. And the scary thing is in this game your rarely get a second chance! So there it is hip hop 101 lol!

7. Can you talk about your label?

Naw man the label doesn’t pay me to talk lol! Yeah of course I can talk about my label. YNJ baby that is the label and please believe we on the rise! YNJ stands for Yahweh Nation Junno and I absolutely love the entire staff. We are all like one big family. I grind just as much as they grind for me and its all for the kingdom. I couldn’t ask the Lord for a better place to be right now then with YNJ they back me up 100% and support everything I do with the label and outside the label with other labels and artist. God is truly good homie!

8. Do you have any current projects?

Man I always got something I’m working on couldn’t stop making music if I wanted too! But yeah I do have a few projects I’m working on at the moment. One is a duo mixtape feat. My boy da duece who resides in Baton Rouge Louisiana. And most importantly I am working and in the process of recording my very first album titled “How Can I Help You”. So world get ready!

9. How can we heard more of your music?

To hear more of Jaelife you can do several things. One which is the easiest check my myspace out at www.myspace.com/jaelife. I stay uploading new material like every 2wks I don’t care about how many plays I get I just want to keep giving the people a variety of music to enjoy! Also you can go to the label website at www.ynjentertainment.com. And most importantly go download my new mixtape hosted by the 2008 holy hip hop dj award winner dj Sean Blu “Weird 2 the World’ is the name of the mixtape. Which feat. My “step it up” track where I spitt 124 bars of heat and I know you Po was feeling it! You can download to whole mixtape for free at www.sacredapparelmixtapes.com.

Go cop that joint I guarantee you won’t be disappointed!

10. I appreciate you stopping by Po Politickin, do you have any last words for the readers?

I just want to say thank you first of all from the bottom of my heart my dude for reaching out and allowing me this wonderful opportunity! Keep grinding and doing ya thing you got to really good thing going with this website and it’s good to know people out there still respect real hip hop and new talent. To all the readers if you want’ get a word I said up to this point get this: It is never too late to except Christ unless you die, so if you still breathing and alive whatever you do in this life first make sure you get a relationship with Christ and the rest is history one!