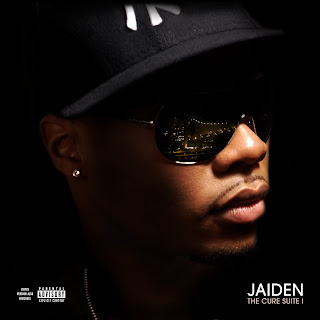 In a time when real singers are few and far between in the music industry, we introduce Jaiden. Boasting a five and a half octave range and unparalleled control, Jaiden’s sound is mature and is one with which few of today’s artist can compare. He flaunts his songwriting skills with concepts that are brutally honest, and down-to-earth, in a way only he can. Jaiden has already established himself as a writer, penning lyrics for other well-known artists such as Jeannie Ortega, Case, and Carl Thomas. Jaiden has perfected his talents while working with super producers Rockwilder, Rich Harrison, Troy Oliver, Full Force and a host of other chart-topping producers. He has honed his stage show from touring experiences with Jay Z, P Diddy, Alicia Keys, Lauryn Hill, John Legend, and Mike Shinoda of Linkin Park. Complimented for his tireless and professional work ethic and endless pursuit for musical perfection, it appears that now is the perfect time for Jaiden to emerge from the background and establish his star, ensuring the world takes notice.

Po: Tell us a lil’ about yourself?

Po: How was it growing up in Long Island?

Growing up in Long Island was interesting… LOL I was one of only a few black kids in my school. In fact, for years it was only my brother and I. Then, when I went to my babysitters or my grandmothers house there’d be only people that looked like me. There was a bit of a culture shock at times. My father was in the military and he past away when I was young. That was when music became my solace.

Po: How did you get involved in music? Who are your musical influences?

I come from a musical family. My mother sang all over the place and I just naturally picked up music. We had a piano in my house and I used to bang on it all the time…and the writing came from me trying to write love poems to girls in school…I realized they were a lot more effective as songs…

Po: I wanted you ask you about your name. Why do you refer to yourself as Jaiden “The Cure”?

“The Cure” comes from a talk I had with Quincy Jones after performing for him at his home in Bel Air. We spoke about the ill state of the music industry and that only somebody (like myself) coming in the game with real musicianship can bring back credibility to the industry. That’s how I became dubbed “The Cure”.

Po: I have also heard your established writer. Can you talk about some of the artists you have worked with? Which artist was your most favorite to work with?

A lot of times when I write for artists I write by myself in the lab and send them what I come up with…One of my most memorable sessions was working with Alicia Keys on the “Glory Road” movie soundtrack in LA. Also, touring and performing “Party Life” with Jay Z was big for me because I’ve always been a die hard Hova fan. One particular show I was on stage with Jay Z, Diddy, Lebron James, Beyonce, Nas, and Kanye West….That’s moment I’ll never forget.

Po: You have also been on some great tours with some wonderful artists. Can you describe that experience?

I’ve been blessed with the opportunity to tour the world several times. Touring with Diddy and Snoop was incredible because their reception around the world is mind boggling. Nothings better than being on the “Puff Puff Pass It To Snoop” tour in Amsterdam…HA!

Well, ’09 will mark the release of my debut record. Come hell or highwater I’m releasing an album this year. By 2013 I’d like to be at least 3 albums deep and continue expanding my catalog by writing with other artists. The goal is world domination!!

Po: Can you talk about your label and any current projects?

Currently I’m writing for Rihanna, J Holiday in addition to working on my own project. “Sideline” A song I placed with Interscope recording artist Mishon just got premiered on his show Lincoln Heights on ABC Family. I’ve just completed the first installment to my mixtape series entitled “The Cure Suite I,” producing new music daily and spending each past and upcoming Wednesday evening at The Den in Harlem hosting my open mic called Uptown Unplugged… that has been real fun because a number of the artist I work with have come thru to show support and even graced the stage… come check me out if your in Harlem on a Wednesday

Po: What advice would to give to any aspiring artist?

Surround yourself with the best team you can and make sure they believe in your vision wholeheartedly. It’ll make everything run smoother

Po: I appreciate you stopping by “Po Politickin”. Can you tell the reader where to go if they want to check out more of your music?

Thanks to the bootleggers and fans…LOL I’m all over the place….I appreciate the interest in the material…I’m all over youtube, imeem, but check out my myspace page.
WWW.MYSPACE.COM/JAIDENIII There you can download some material for free, or purchase a few of my singles

Po: Any last words for the readers?

My management can be reached at www.myspace.com/zingarimanagement please reach out for any bookings… I would love to bring my show & live band “The Light” to your city. Look out for THE CURE SUITE I hitting the streets and the internet before the end of December, and if your in New York and love live music come thru Uptown Unplugged Wednesday night hosted by your boy Jaiden “The Cure”…