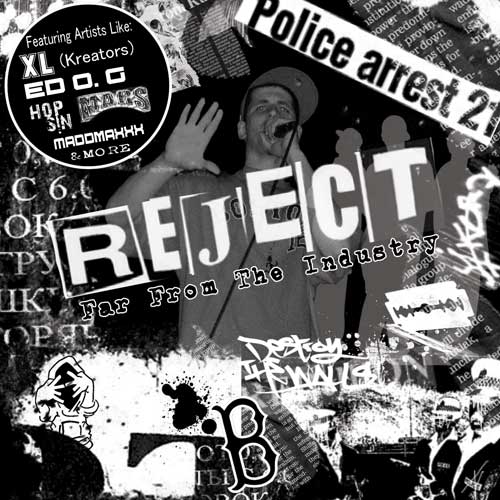 We recently politicked with Boston hip hop artist Reject about his love for Massachusetts, favorite albums, and more. Check It!

Po – Name five things you love about Massachusetts.
Reject
1 Everybody that raps out here is a beast, Lots of Talent in MA
2 I love the City of Boston, Specially at night everything is Bright and in your Face
3 I grew up here, This is and will always be my Home
4 Older (Legendary) HipHop Artists seem to help out the up an coming in Boston.
5 I know these streets Very Well and the Respect is always strong, Mass is like 1 big Family.
Po – Name five things you can not live without.
Reject
1 I can’t live without good music, If it aint sounding right it needs to be fixed
2 I can’t live without my SQUADS (HytownRecords, CrookFirm, Prolific) Without them there is no me.
3 I can’t live without food on my plate, so technically i cant live without Money
4 I can’t live without Females, Its just never a problem if it was i’d be introuble!!!
5 I can’t live without the studio, without it i’d die Realtalk.
Po –  Name three traits that seperate you from other hip hip artists.
Reject
1. I am a M.C, Nowadays i feel there is no emceeing but more Pop and Swaggg (If thats what u wanna call it)
2. Im real Raw, i don’t think anybody could master the Voice God gave me
3. I feel out the beat before i use, Nowadays i feel as songs are setup and not from the heart..Everything i do is From me Exclusively Written by me.
Po –  Name your top five favorite albums of all-time?
Reject
1. Ready To Die – Notorious BIG
2. Automatic – Cognito
3. No Contest – The Kreators
4. Independence Day – Twiztid
5. StereoTypes – Special Teamz
Po –  Could you discuss your current projects?
Reject
Right now, I have my single “Don’t Wanna Here It”  with EdoG Dropping May 3rd on Itunes! Make sure u Pick It Up!
I also have a 14 Track Mixtape called “Live From The GreenHouse: Piff, Hash & ZigZags” Dropping 4/20/11. Its a Mixture of upcoming talent ive been working with for years, There group name is “CrookFirm” We all are from Brockton MA, This mixtape was Recorded and Mixed by Leedz Edutainment, So Pick it up on Datpiff.com the 20th of April. Other than that im working on my upcoming LP “Far From Industry” Which should drop in the next year or so. I dropped a 10 Track mixtape as well back in Jan. on Datpiff.com called “This Shoulda Been A Album” Pick that up for Free!!!
Po – Who has influence your career the most?
Reject
Life wize i would say the people im surrounded around, and the neighboorhoods i have grown up in, Everybody has always been trying to “Come Up” you gotta persue what your dreams are, My dad always said i had a talent with Music cause i have loved it since i was a child and i grew up off of Hip Hop. Music wise i would definetlly say My producer since i was like 15 “Scoota” He set the mood and set the start too some of my career, Others like XL (Of The Kreators) Had the might to believe in me and open up doors i would of never pulled (Or pulled as easy as i have been) People think its crazy ive Worked with “Ed O.G” Because he’s a O “Mudda Fuckin” G, An here i am 20 years old haha. I just was always on the grind, sence the age 14. Stayed doing shows, traveling, collabing, recording, mixtapes every 3 months, stuff like that. They know me out here in Boston for my Grind & orignallity and the movement that Myself and Hytown Records have made. Nobody has really Done what we have done out here. I rose with the Underground and made the public eye fiend for Updates, Which is why my upcoming LP is named “Far From Industry” cause i did it myself.
Po –  Thanks for coming through politickin’ with us. Any parting words for the readers?
Reject
Just wanna say thank u for having this Interview with me! And being interested in my “Movement”, Wanna let all the upcoming MC’s know around the WORLD- Do Not Stop Trying and do not Give up your grind. If u have a gift use it. Thank You. Shouts to XL, Matt Diamond & DJ Addition
Share it: