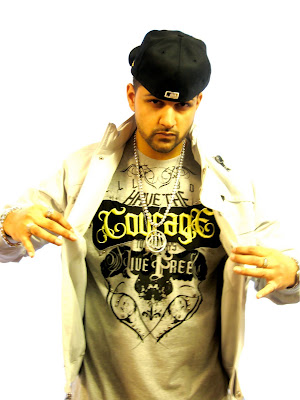 Baltimore emcee Sullee J describes his music as a refreshing new voice of hope for his generation. His music exposes internal human struggles along with society’s problems. Sullee J’s music promotes positive action and personal enlightenment, as he writes from a deep inner reflection upon his life and environment.

Po: Sup Sullee J, thanks for stopping bye. I read that your music, “Exposes internal human struggles as well as society’s problems”. Could you explain this?

Sullee J: Hey Po, What’s good! I feel like sometimes I may have went through almost everything besides death, and have been close to it several times. Instead of writing about the incidents, more so I like to talk about how to get through them, and provide some sort of guidance through my music. Human struggles, mean scenario’s like relationships, addiction, rape, poverty, and societies problems revolve around racism, democracy, stereotypes, hate crimes, and such.

Po: I see you are from Baltimore. When did you fall in love with hip hop? Who are some of your musical influences?

Sullee J: Man, I grew up loving hip hop, I always felt like music was like a getaway for me. When no one understands you, and you don’t feel like hearing no one out, just turn up a song you can relate to and kick it. Growing up, I wrote poetry for the most part, usually about how I felt, and situations I would come across or even see. I was so addicted to the rhythm, even in school; all of my notes would become rhymes. Eventually, I started to post up my work and people told me I should try to put it over a beat, which I did and it brought me where I am today. My musical influences, I look at more than just the publicity of a person, or how much money they are getting, I like people like Pac, DMX, Mos Def, Talib Kweli, Common, basically artist who say something meaningful and are trying to open eyes.

Po: In the next two years, what’s your top 3 career goals?

Sullee J: Tour, Go platinum with the album we are creating because it’s going to be a classic, and be on every speaker/TV/radio that exists.

Po: I seen you recently opened for Mos Def in Norway, I am sure that was supadope.. How was that experience?

Sullee J: Hell yea! It was amazing, the crowd was ridiculous, I loved Norway, the people are real supportive, and of course Mos Def being one of my biggest inspirations, it was like a dream for me to be on the same stage. Shout outs to Dee J Unica for making that happen!

Po: What’s your label situation? Do you have any current projects out?

Sullee J: Label wise, I have a few offers on the table that Im just waiting out on to see more opportunities, I believe the more and more fame I keep getting, the better chances that keep coming. I believe in myself 100% and God, so I know when It’s the right time to get signed, it will happen, right now I got to stay on the move, on my grind. I do have a few projects I am working on right now, one of the biggest ones is a tour which should be in November, more information will be released on that soon, I should be in this upcoming XXL issue of August 2010. Maria Monique Last Wish foundation is a globally acclaimed charity which has picked me up as an artist, that I will be supporting them by making them a theme song, as well as flying out to Indonesia around end of July, beginning of August to visit different villages and help, earthquake victims, paralyzed and terminally ill children. You can see the article they posted on me at – http://mariamonique.org/sulee-j-will-be-helping-the-mmlwf.html

Po: Thanks for stopping bye, is there anything you would like to say to your fans?

Sullee J: No Problem, it was my pleasure, and to all my fans I love you! And I can’t do it without you, you might hear that from a lot of mouths, but it’s true. I won’t let you down!