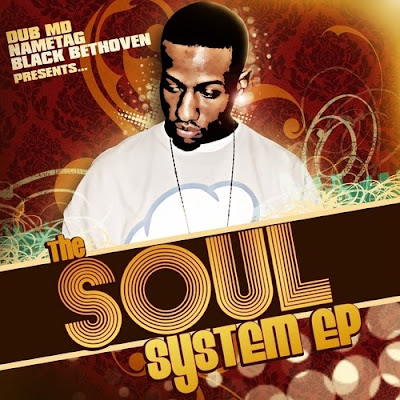 The Soul System EP is the newest project from Detroit’s Nametag, produced entirely by Black Bethoven. The concept of the “Soul System” is, “One producer, One emcee, One concept…One EP.” It came about originally with Black Bethoven preparing to release an instrumental CD to follow up 2009’s “Da Ear Hustle” but with an idea inspired by Dub MD, the emcee and producer decided to team up and create a music piece that provides food for thought you wouldn’t find in your local grocery aisle. With tracks like “Time” which is the EP’s leading single, Nametag and Black Bethoven prove that soul music has a permanent spot in the hip hop genre.

After a plethra of mixtapes and EPs, Nametag is finally releasing his first official solo album titled “The Name Is Tag”. Although there is no set release date yet, Nametag has confirmed the album will be a 2010 release. The production for the LP is a definite eyebrow raiser with beat contributions from international producer Black Milk, Black Bethoven and Chris Sholar. It is also filled with guest features from groups such as Street Justice, Cold Men Young, and champion-esque collabs with Finale, Quest M.C.O.D.Y, Buff 1 and Ro Spit. It’s safe to say that “The Name Is Tag” will be an undeniable album, stay tuned.