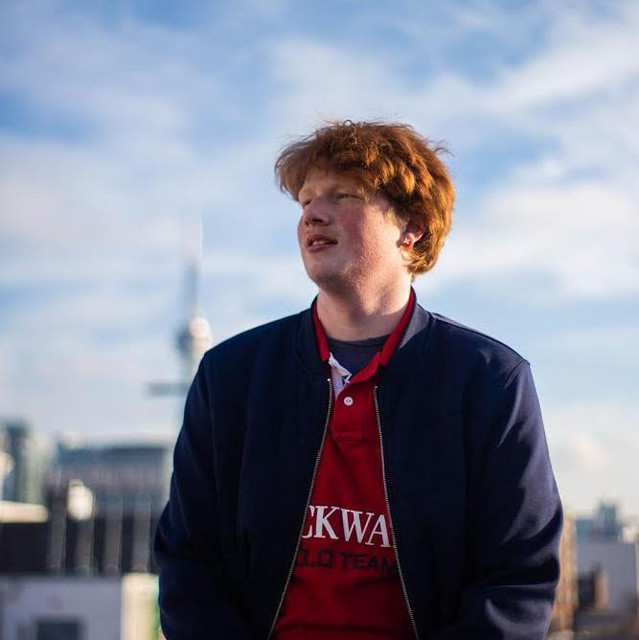 C-Dot’s music is a blend of Hip-Hop, Rap, and Pop, with just a touch of EDM. His way of blending these genres has been crucial to his current success and has aided in growing his fan base all over the world.

C-Dot 416 currently has fans in over 73 countries around the world, contributing to over 2.5 million streams on Spotify alone.

Though C-Dot 416 was born in Maine, he grew up and was raised in Toronto. Living in Toronto changed C-Dot’s life and helped shape the person he is today. C-Dot’s catchy hooks and clever verses have contributed to his early successes. Fans can’t get enough of his music as it paints a vivid picture of his past and present, leaving them wanting more and more.

C-Dot’s biggest song to date, Strange Love, was released in late June and has generated over 2 million plays between popular streaming services and Youtube. We expect to see further success with the song as its popularity continues to grow.

You’re going to want to be along for the ride because big things are coming for C-Dot 416.

Q1 – Thanks for stopping by to politick with us. I was reading that you are originally from the Toronto area? What made you relocate? Can you discuss your background and how you fell in love with music?

I was originally born in Portland, Maine, when I was three my mum moved my sister and I to Toronto to help take care of my sick grandmother. Our neighborhood in Toronto wasn’t the safest of areas for my sister and I to grow up in. After the passing of my grandmother, with the money my mum received from her will, she moved us back down to Maine when I was 13. I’ve always been a fan of Hip Hop and constantly found myself singing along to the greats, Tupac, Nas, Lil Wayne, 50 cent, and T.I. With the struggles I faced in Toronto, I needed an outlet, I tried my hand at writing and over time I got pretty good at using music to help tell my story.

Q2 – Can you talk about your artist name?

C-Dot 416 is a play on one of Toronto’s oldest nicknames, The Dot.. Basically the easiest way to put it is, I’m Caleb from the Dot. 416 is the area code, I had to show some love there too.

Q3 – Who would you compare yourself to musically?

I like to think I’m pretty unique in my overall sound, I’m proud of that, telling my own stories and using that as my inspiration. As far as influences go, though, id say the melodic style I use is partially influenced by Post Malone, but I pride myself on being a lyricist also.

Q4 – Who is your most dedicated and loyal fan? (Excluding family members)

I actually get a lot of love from people all over New England. My fan base is stupid loyal to me. I’m always being stopped by fans to take a picture or chat, I actually created a whole insta just to show them some love, I post the pics they take with me.  My fans are always surprising me, just recently I got a message from two of my fans from Michigan, they told me they are driving all the way to Maine just to see me. You should see the thousands of messages I get from fans telling me my music has changed their lives, it’s really what inspires me to keep going. Anyone that takes time from there day to share with me, a total stranger, about their struggles, they are all my most loyal and dedicated fans.

Q5 – Can you discuss your current projects and plans for 2020?

No albums just yet, if that’s what you mean, but I have a lot of big plans to finish up the year. I plan to release plenty of singles and we’re shooting some really dope music videos. I also have my revamped merch line dropping soon. Lets just say I got a couple songs I know are going to be huge and my fans should be really excited for them.

Q6 –  Can you describe the new single “Strange Love”? Is there a music video for it?

Actually Strange Love isn’t new. We released it in April and it’s been the biggest song I’ve dropped yet. In its first 24 hours it did like 20,000 streams on just Spotify and by the end of the week it reached over 100,000.

At its core, Strange Love is a love song. I heard the beat and I connected with it immediately.  I think I finished writing the song in like 15 minutes, I knew it was going to be a good one. What I like about the song is it really is upbeat, you’re not going to sit there and cry when you’re listening to it, but I think people connect to it because it’s real. I wrote the song based on my real relationship, one that wasn’t easy, one that was quite strange. It’s weird how love will  make you stay in a situation that is not good for you.

As far as the video goes, we actually flew to LA and shot one, but all kinds of drama happened and It was never completed. I’m actually dropping a song August 28th that talks about that experience as well. Make sure to check out “California” when it drops on the 28th. We are going to shoot a new video for Strange Love and it’s going to be amazing.

As an artist I’d love for people to hear my three part album I released, “II-VIII-MCMXCIX”, it really tells the story of me and that’s something I want people to know, that’s why I do this. That being said I know that isnt always an option and so I really think Strange Love is the best track for people to hear to get an idea for what i’m all about.

Q8 – Have you worked with any known MC’s/Producers,etc?

I have a few songs with CashMoneyAp that turned out really dope. Im working with a similar sized artist who’s out of New York, Johnny2Phones, I think people are going to really like those songs.  And I also got a track with Boston’s own, Matt Corman.

Thanks for having me! I’m excited for the readers to check out my stuff, you can find me on all music platforms and Youtube as C-Dot 416 and all social medias as the same. Thanks again and be ready for some big stuff coming in the future.