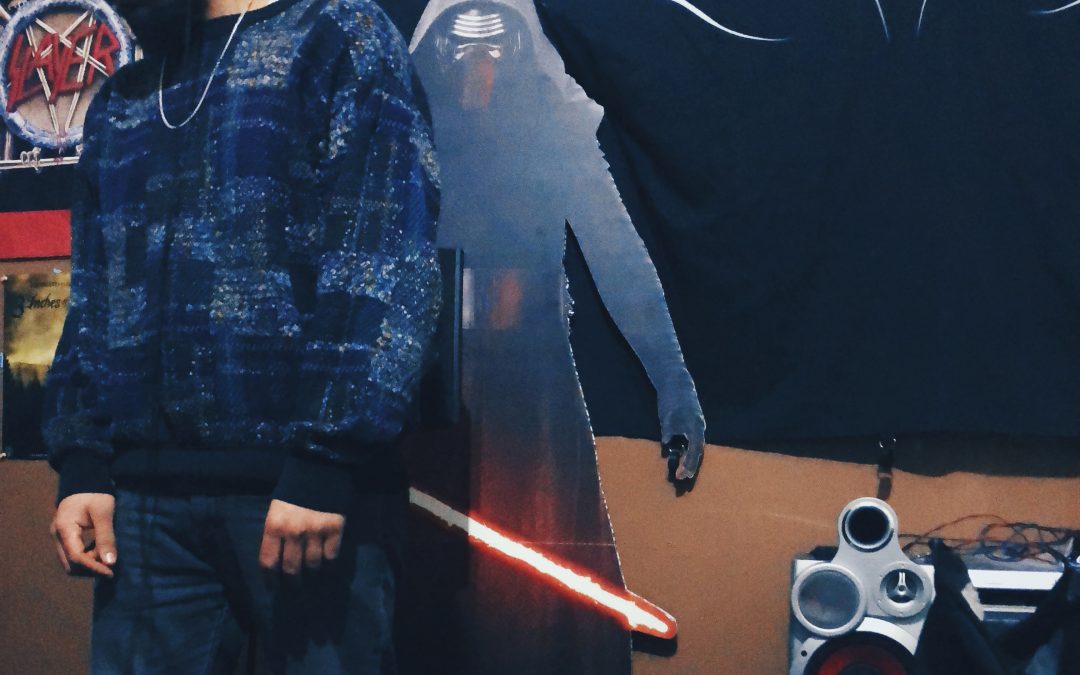 Chicago artist Geedomane presents the Tusk-directed music video for “Afraid”, the lead single from his debut EP Vanquish. Beginning his musical journey on the bass guitar before expanding his skill set to electric guitar, beat production and rapping, Geedomane wrote, recorded, performed, mixed, mastered, and produced_Vanquish_ entirely alone. Geedomane is also an accomplished photographer (website). “‘Afraid’ is about heartbreak and the pain that comes with of overcoming it in hopes of everything turning out better than it once was,” Geedomane says. “I was deeply in love at one point and now my old lover has moved on, I am afraid that I will never experience a love like that with anyone else. I am afraid that the next person I will be with will not give me the same feeling I once felt and would only serve as a comparison to what used to be. This is something for anyone looking to move on from a past lover.”

How did you get your stage name?

I got my stage name Geedomane from a variety of sources. First and foremost, I got the nickname Geedo a very long time ago from one of my siblings. As a kid I think my sibling was mocking me about me eating too many Cheetos or something like that and Geedo came from that and just stuck. Before I knew it I had all my friends from the block calling me Geedo and it just stuck from there. As the years went by, everyone knew me as Geedo and one day I ran into of my homies and he just said “Yo! Geedomane!” it was the first time anyone really called me that. I liked that name right away and it stuck with me. Some time after that when I started taking music seriously with producing and everything, I realized I needed to establish a memorable stage name and Geedomane was the only one that came to mind. It fit everything I was looking for, something short, memorable and easy to find. It also felt natural since all my homies call Geedo anyway so just adding the “mane” to it made sense. Of course, I also like the name because it serves as a small homage to the Trap God himself, Gucci Mane. I am a big fan of him and admire what he’s done for music so thats a nice plus.

What made you decide to become an artist?

Deciding on becoming an artist was a result of a few things. Firstly, I knew I always wanted to be a producer and musician from the second I heard songs I liked. As a kid when I heard some good music I knew I wanted to do whatever they did. I knew I wanted to at least make music but I wasn’t really looking to be in the spotlight like an artist at the time. It wasn’t until I was some years into producing for different rappers that it struck me that there was the possibility of me becoming an artist. Once I had that idea, it stayed in the back of my mind and I kept thinking about it until I finally decided to take the next step and actually do it. A lot of it that pushed me was that as a producer, I was working with certain rappers and after certain sessions I just felt they didn’t have the drive to get out there. Like I wanted to do so much and had lots of ideas and some of these rappers were indifferent about it and didn’t share the vision or didn’t want to put in the effort to get to where we needed to be so one day I just told myself that the only way I’m gonna get to where I wanna be is if I do it myself and so I did and haven’t looked back. On top of that, as you can hear through most of my music, I was going through a rough patch at that same time and it started to feel like I couldn’t express it or get through it so as I was looking for a way to cope with all that I realized that maybe if I start to write about it, that could help and it did. So all in all I feel like all the signs presented themselves at the same time so I made that decision and haven’t looked back.

What’s the first rap song you ever heard? Describe the moment.

Oh man, I can still remember it. I was probably like 5 years old and my Moms has the radio playing in the kitchen. I’m not sure how it ended up in the Rap radio station but it did. The first rap song I remember vibing with was Ms.Jackson by OutKast. I remember coming into that kitchen and the chorus was playing and I was hooked. I remember just repeating “I’m sorry Ms Jackson, I am for reallll” over and over after I heard that song. I didn’t even know who the artist was at the time or anything I just knew I liked that song so much and I asked all the older people around me who sang that Ms.Jackson song until someone finally put me on to OutKast and it all started from there.

How did “Afraid” come together?

Afraid came together in two places at the crib and then at the studio. This is the last song I did for my Vanquish EP; so basically I was thinking that I needed one more song to complete the project and in that time I was just making beat after beat, nothing specific, I was just cooking up. When I made the beat for Afraid I wasn’t thinking really about making it a song, I just remember making the beat and thinking like “damn, this is a good vibe, I’m feeling this” after giving the beat a few listens, the hook just popped right in my head, like it had just hit me and came to me out of nowhere and I was kind of just kind of like “oh damn, I guess this is gonna be my last song”. So after that I went to the studio the next day and laid down the hook that was in my head and wrote the verse there until I had what I wanted and just laid it all out.

What are your thoughts on the year in music?

This year in music was dope! There was a whole lot of dope stuff dropping every week and it was kind of hard to keep up but other than that I thought it was a good year for music. I thought it was a good year because there was just dope releases coming from every genre. There was something for everybody and a lot of artists really established and stayed true to their sound. Like I feel there’s been years where most artists just try to follow whatever is hot at that time and it doesn’t sound too genuine. This year I feel there wasn’t too much of that so all that genuine music just stood out to me. On the rap spectrum, I thought Saba’s Care For Me album was probably the dopest album of the year and Gunna’s Drip Season 3. Those 2 albums are albums I keep in heavy rotation to this day even though they came out some time ago earlier this year.