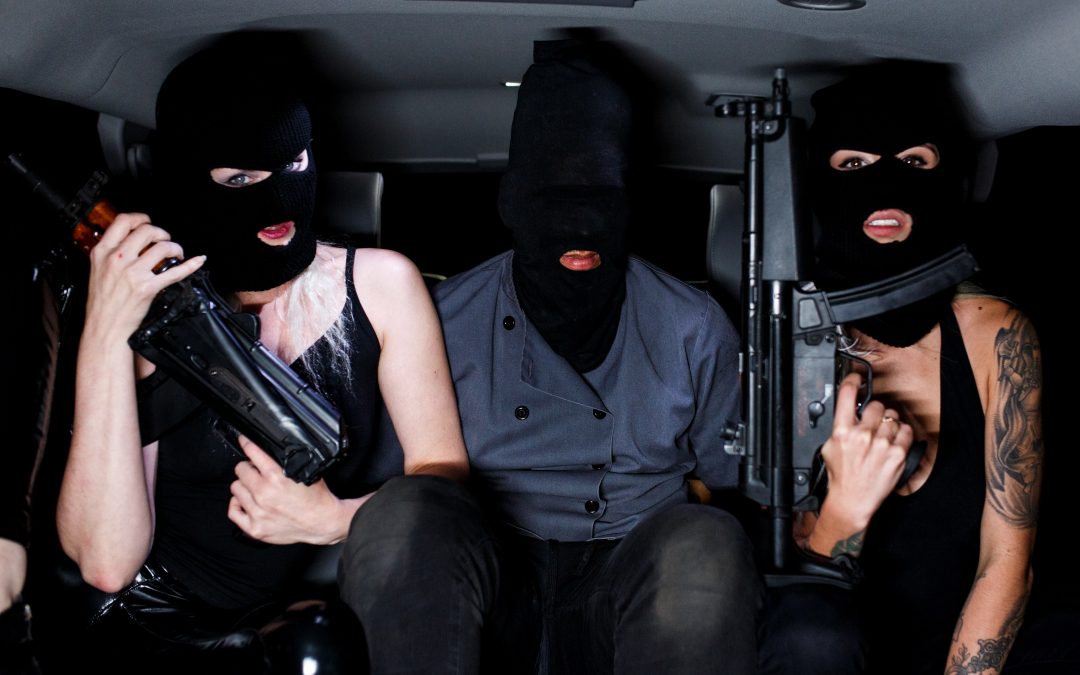 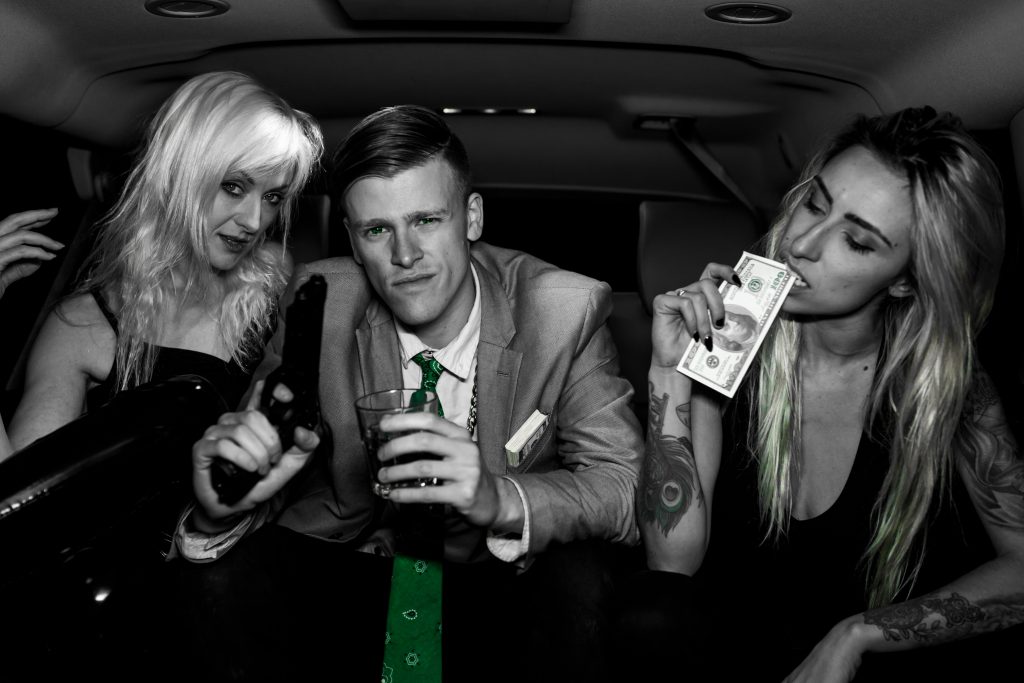 Seattle-based emcee Sly deSilva and Toronto-based Jagger James present the Paul Maxwell-directed music video for “24/7”, their new single on Ghost Money Records. “24/7” appears on Jagger and Sly’s collaborative mixtape Trillions, their ten-track project that shows each emcee portraying opposite sides of America’s have/have-not divide. Jagger and Sly are currently working on solo EPs for 2018 – Baby Jaguar and Land of the Free respectively. “It’s the paper chase,” Sly says when asked about the inspiration behind the new single. “Getting money. 24/7, 365, the hustle never stops.” Jagger elaborates, “I’m the hero, working hard, struggling to get by. He’s the rich, evil villain trying to push me down the wrong path. We’re from different worlds, with different views, and we’re always in opposition. But it’s like, there’s this one thing we have in common.” “It’s still all about the Benjamins” Sly adds.

What made you guys decide to become rappers?

J: Growing up as a biracial kid who did pretty well in school, teachers and adults would always be like “Jagger, make something of yourself, don’t be another black kid trying to be a rapper”, so for a long time I didn’t want to do that. But as I got older, and I looked at my life, my past, where I was at, and the type of future I envisioned for myself, I knew I didn’t want to have a typical job making someone else money. I realized I shouldn’t deny myself the chance to actually create something, and do something worthwhile for myself. Why settle for less, why not go for it?

S: It just kind of happened. Jagger and I known each other since high school, and after we graduated we started writing raps when we hung out. It’s just what we did. Tons of late nights practicing in my college dorm room. I never planned to do it seriously until I had the whole white-collar gangster rap idea, and wrote the first Sly deSilva track. I knew I was onto something immediately, and got serious about it real quick – quit my consulting job and got in the lab to make my EP, The Bad Guy.

What’s the first rap song each of you ever heard? Describe the moment.

J: When I was growing up in the 90s living with my mother, she played a lot of R&B music, and eventually R&B started blending into hip-hop around the 2000s with the bling era. I didn’t fuck with ringtone rap at all, so I didn’t pay much attention, and then Eminem really blew up. The song “Mosh” was really dope and resonated with me, since I was an illegal immigrant living in Spanish Harlem in New York City during the George W. Bush years. The lyricism, the energy, and what it meant to all the downtrodden people in my situation. We couldn’t vote, and we couldn’t speak up, but we could play that song.

S: I wasn’t much for the bling era either. I grew up around hip-hop, but what I was hearing wasn’t doing it for me. But probably the song that first grabbed me was like… this DangerDoom [MF DOOM & Danger Mouse] track with Talib Kweli, “Old School”. I heard it on some bootleg mixtape – I don’t even remember why I was listening to it. I just remember thinking it was so vibrant, fun and different from what I’d heard – these cats were rapping about cartoons over this awesome sampled beat. Opened my ears to possibilities.

J: So we had been working on Trillions a little while, when Sly said to me “Yo, we gotta make a hustle song”, and I was like “really, like every other rapper?”

S: And I said “yeah, but ours is gonna be a bit different ‘cause it’s us”

J: I wasn’t that interested in the idea, but I was like, “sure, let’s workshop this”. Sly had this beat in mind, and he played it and I started vibing to it. Next time I came through the studio, he had the hook written.

S: I don’t even remember much of the writing process. It just came together fast. Faster than probably anything else on the mixtape. I just talked my evil villain shit – getting all this money, all the time, off the backs of everyone else.

J: Same, it was easy ‘cause it was true to life. I was working two jobs at the time, and rapping too, so my life was pretty much a constant grind. 24/7, working my ass off. That came through in the verse.

S: After we decided it was gonna be the single, I had to go back and make some changes ‘cause [Quinn Abner, executive producer, Trillions] said I had too much political content for the single.

When you guys went into this project together, could you have foreseen how starkly the world would soon mirror so closely the dichotomy you two embody now in light of the Trump administration? Do you think this administration is causing your music to be received in a different light than before?

S: Man, I had a whole track about this shit I that I wrote back in 2015. “Performance Review” off The Bad Guy. I saw this whole situation brewing; this rise of white supremacy, this increase in income inequality, this glorious dumpster fire that is America. Go listen to that track and try and tell me it didn’t all happen. I told you all if you didn’t do something to stop it, it would be villains like me stuffing their pockets off all your pain and suffering. And here we are. My pockets are full, and we only just getting started. Buckle up kids. You dumb motherfuckers let this happen, now you gonna see it all unfold.

J: It was always like this. We been known this was gonna happen. As soon as Trump entered the race, as soon as it was a possibility, it was evident to me that something was wrong. How does someone like that even have a shot? It wasn’t like “oops, he got elected president”. This shit was happening. Trillions isn’t about “Trump is the president”. It’s about the systems and culture that allowed this to even happen in the first place. Even if Hillary had won, the mixtape wouldn’t have been much different. But now people are paying attention. Real life is such a cartoon now with him in the White House. The epitome of everything that’s wrong. It’s like Sly deSilva being president. It’s put a magnifying glass to what’s been going on for decades. So people see our music now and they say “that’s so relevant in the Trump era”, but it’s always been relevant. People just weren’t paying attention.

What are your predictions for 2018, personally, globally, musically?

J: Personally, I’m predicting more success both as a cook and a rapper. I’ve been grinding all 2017, and I’m gonna keep grinding into 2018. That’s all gonna start paying off – I got two solo projects coming this year – Baby Jaguar and then FASTMONEYBLE$$INGS. Globally, I’m predicting things are gonna get worse before they get any better. I’m concerned about global rise of nationalism and populism. The increasing lack of transparency and suppression of information. Everything can be said to be “fake news” now. Musically, I think the current trendy sounds are here to stay, at least for another year or two. But at the same time, I think music is cyclical, and people are starting to get thirsty for lyrical rappers. Someone is gonna come up and grab people’s attention out of nowhere.

S: Personally, I feel like 2018 is gonna be a big year for me. People are finally ready to hear what I’ve been saying since I started this rap shit. The sheep are finally being forced to look at America’s true face, and I am her dark reflection. I’ve got an EP in the works called Land of the Free, and I think it’s gonna give people something to talk about. Musically, in 2018 I think that’s what people are gonna want – some real content. Look at all this shit going on in America – people are either going to want to escape it with ignorant turnup music, or they’re gonna want to confront it head on. We gonna see some of the most ignorant, and most topical music this year. And globally? Oh boy. I salivate at the thought of how much more fucked up it can all get. I predict Sly deSilva will be very happy indeed.