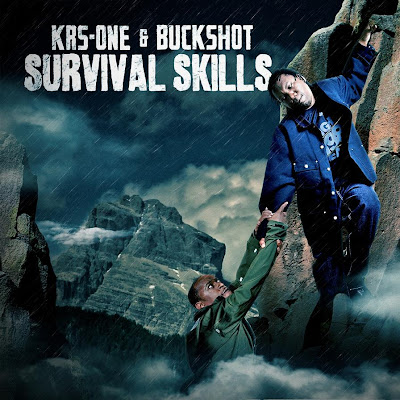 After making their indelible marks on the game luminaries KRS-One and Buckshot, arguably two of the games most prolific emcees, will link up to give fans a collaborative album entitled Survival Skills. The project will be released on Duck Down Records, September 15,th while the duo will be featured on The Rock The Bells tour this Summer.

KRS-One and Buckshot are the epitome of rap longevity and relevancy. After making his 1987 debut with Boogie Down Productions on the seminal rap classic Criminal Minded, KRS-One instantly became an icon going on to release a gang of essential works including 1988’s By All Means Necessary and 1993’s Return of the Boom Bap. Similarly when Buckshot came into the game in 1993 with Enta Da Stage as Black Moon’s front man, fans instantly took notice.

And the party never stopped, KRS-One’s 2007 collaborative album with producer Marly Marl, (“Hip Hop Lives”) was critically acclaimed and his work on “Classic,” the Kanye West, Nas and Rakim featured track celebrating the 25th Anniversary of Nike’s Air Force 1 shoe, earned the Teacher a Grammy nod. Buckshot has continued to churn-out some of the game’s most progressive projects as well, most notably his 9th Wonder-produced albums Chemistry (2005) and The Formula (2008). Couple those with the licensing deals which have landed Buck’s music on networks like ESPN and The History Channel, as well as an episode of CSI Las Vegas and it’s clear to see why the Boot Camp general has remained one of the game’s most influential.