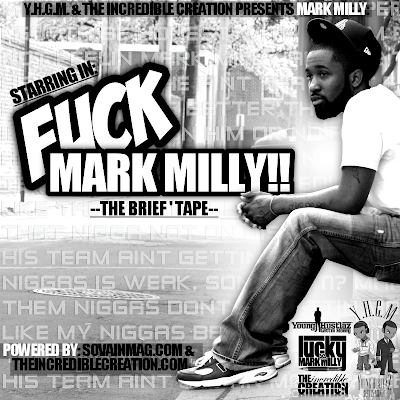 That is something you never want to say to anyone is it? However, Baltimore artist Mark Milly has changed the connotation of saying #FuckMarkMilly (popular Twitter lingo, with adding the hash tag). Over the past month or so it has been an on-going joke with his friends about saying #FuckMarkMilly and he thought why not turn this saying into a nationally known phrase. Never at any point was it used to be negative but actually to be something funny and made the people wonder why they were even saying it. Well, now you will find out. With this project being his first official summer release, Mark Milly has a power packed body of music for your enjoyment.

This hot summer project, one that will definitely keep the ear buds in your ear is powered by SoVain Magazine & The Incredible Creation. Just for your fun music facts, the track titled “How Can I?” is a sample of 80’s R&B sensation Lisa Fischer’s “How Can I Ease The Pain” and that will be a favorite by all who listen to #FuckMarkMilly. To follow Mark Milly and his journey visit him @MarkMilly and be amazed by the “incredible creation” he is and why the people say #FuckMarkMilly, but in a positive way of course.