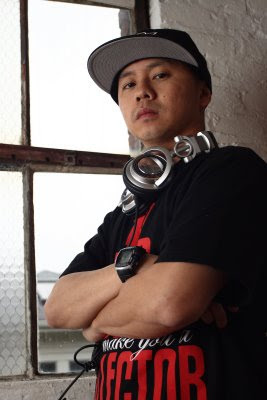 From the clubs to the streets, North Carolina’s resident do-it-all Dj, Dj Paradime has his hands in everything. Part of the Dj crew Juke Box Hero’s, Paradime has made a name for himself as one of the few Dj’s who can spin records for a celebrity crowd, then put together a mixtape that makes you feel ike it was custom made for your ears only.

Popolitickin.com caught with Dj Paradime to talk about We Are Your Heroes and what’s it like to spin for hip-hop’s first couple Popolitickin.com: How did you get into Dj’ing

Dj Paradime: I’ve been into hip-hop since I was in middle school. I went to a really diverse middle school. Everybody would either break dance or do graffiti and I wasn’t good at either. When I moved to Greensboro I met a Dj who was really into house music and from there I got into wanting to spin records.

Popolitickin.com: Dj’s are placed in categories nowadays. Would you consider yourself a club Dj, mixtape Dj or both?

Dj Paradime: I’m versatile. I do the mixtapes and the podcasts. If it’s a mixtape it’s going to mixed! It wont just be a bunch of tracks. When it comes to clubs, you’d be hard pressed to find someone how can rock a hip-hop club in the hoodest of places then go a rock a top 40 club.

Popolitickin.com: What are the biggest differences you see between yourself and some of the new school Dj’s?

Dj Paradime:I grew up when people still collected records. You didn’t havea digital Serato. It was more quality of music than networking. Now its how many friends you have on facebook.

Popolitickin.com: I heard that when Jay-Z came through the Carolina’s for the Blue Print 3 Tour, you had the chance to Dj his after-party. What was that like?

Dj Paradime: Yeah, I did the afterparty at Lotus Lounge. He came through with Beyonce and chilled out for a little while. It was big. It’s great to have on your resume but I still want the respect of my peers! Where I’m from, its still about the art. Its not rocking the biggest parties but having the skills.

Popolitickin.com: Dj’s are moving from just being Dj’s to being businesses in today’s hip-hop. Do you see yourself taking on an artists of your own or dropping your own album in the near future?

Dj Paradime: I do have a producer who I’m working with named J-Mack. I’m helping him get his music into the right artists hands. He’s real talented. I’m also working with some emcees. I got a couple of mixtapes coming up. And my group the Juke Box Heroes are planning monthly events. But as far as putting out my own album, I don’t want to go that route.

Find out more about Dj Paradime at www.WeAreYourheroes.com and follow his movement at