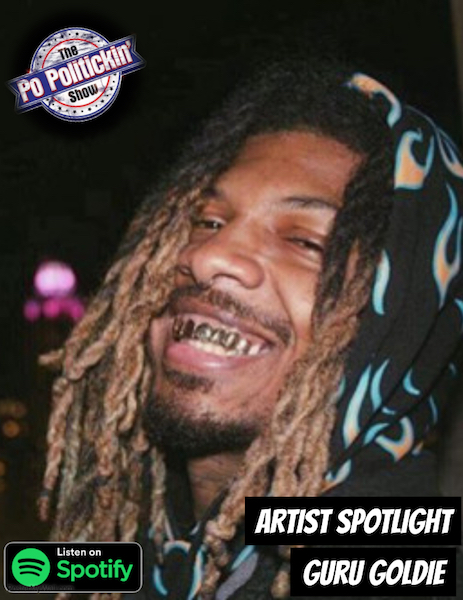 In this episode of PoPolitickin, we politick with Guru Goldie.

Guru Goldie was born and raised on the Chicago’s South Side. He is the oldest of 8 children to a single mother and has a 3 year old son that means the world to him. The upcoming Chicago artist has gold teeth, dyed dreads, and a ton of tattoos; which a large portion he has done himself before he took on music. He started his music career, because he found himself surrounded by people that were into music and working in the Entertainment Industry. One day Guru Goldie decided to give it a try. He only has 2 years invested into music. In those 2 years he has learned so much about the music industry, accomplished a lot, and continues to grow as an artist and performer. Guru Goldie has performed at over 30 shows all across the nation in Chicago, Dallas, and Denver. He has opened up for Famous Dex, A Boogie, PnB Rock and Future. Guru Goldie just headlined his first Chicago show in May 2017.

Guru Goldie has been working closely with BenOne, JoJizzle, Vonmar, World Famous DJ Shon, SnapBackOnTheTrack, and many more. He has a lot of upcoming shows and a very highly successful mixtape “#RoadShyt” that was released in July of 2017. The mixtape is a collaboration with JoJizzle, features from BenOne, and produced by JBThePhilosophy and SnapBackOnTheTrack. Guru Goldie is currently working on his solo EP. “Rose Goldie” which was released in May of 2018. Some of his hottest songs that he is pushing are, “Neva Had Shyt” which can be found on YouTube, iTunes,Spinrilla, and all major music stores, along with “The Man” and “Trap Boomin’.” Guru Goldie hopes to continue to grow and to make a huge impact on the Entertainment Industry.