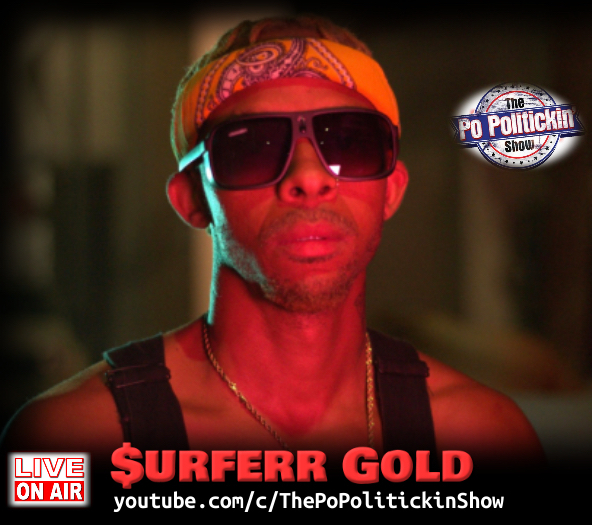 In this episode, we are joined by $urferr Gold. $urferr Gold was born in Detroit,MI. As a young boy he relocated with his single mother to Marietta, Ga in order to be closer to other members of his family such as aunts and uncles. Even as a young boy $urferr Gold displayed a talent for showmanship, at one family reunion for example the young $urferr Gold got up on stage in front of the whole family and started singing yes jesus loves me after which the talented young boy asked the rhetorical question, Can A Man Sing! To which his whole family erupted in cheers and laughter. This event would foreshadow $urferr Gold’s chosen entrepreneurial path as a Rap Artist in years to come. Beginning at the age of 15 the then adolescent $urferr Gold was put on to the classic work of art “Reasonable Doubt” by Jay Z.

When $urferr heard the way Jay wove his tales of self belief and bravado he was forever changed. If that wasn’t enough to spark a young $urferr Gold’s interest in rap music then his first time hearing Nas’s classic Illmatic completely sealed the deal. He was beyond inspired by Nas’s ability to paint such vivid pictures using just lyrics and a beat. It was as a teenager that $urferr Gold began to hone his listening ear as a fan of the greats. He later spent time in Seattle which also influenced him musically. He would soak it all up over the years developing a distinct ear for only the finest hip hop and rap. Finally as the teenager developed into a young man, $urferr Gold began the task of creating his own unique rap style while simultaneously crafting and strengthening his unique image as well. Thus Thawtful-Records was eventually born while $urferr Gold was living in downtown Atlanta with his then girlfriend and soon to be wife. Thawtful -Records is a play of the name of the egyptian god of magic and writing Thoth. It also represents the level of thought that $urferr Gold is known to infuse his lyrics and rhythms with. Starting in 2018 and going into 2019, $urferr would release a slew of hit singles which was followed by the first complete body of work that $urferr Gold released from his self owned label Thawtful Records would be The Orange Tape which was released in 2020. The Orange Tape was quickly followed by the release of The Gold Tape later in the same year. Both albums were received with excellent fanfare, by fans, bloggers, peers and critics alike. The most recent release by $urferr Gold is his third complete body of work titled Lucha Libre.

With each release its evident that $urferr Gold is a perfectionist that is never satisfied with anything less then the best musical performance that he is capable of.Each of the three projects are exceptionally good on there own but together they represent the artistic growth of $urferr Gold. On Lucha Libre $urferr Gold expresses raw emotions that the listener can instantly feel. Soul In The Dark is the lead single off the project and its already going viral on TikTok. This is just the beginning for $urferr Gold’s musical career but you can bet that with the passion and work ethic he has for greatness that he will achieve many more milestones, awards, and trophies as his career continues to gain traction with new fans. $urferr Gold is definitely an artist to watch in the coming years and months. Before long the name $urferr Gold will be synonymous with G.O.A.T. For the moment $urferr Gold is living in Mexico with his wife and together they are traveling the world all while making the best music possible. http://www.thawtful-records.com/