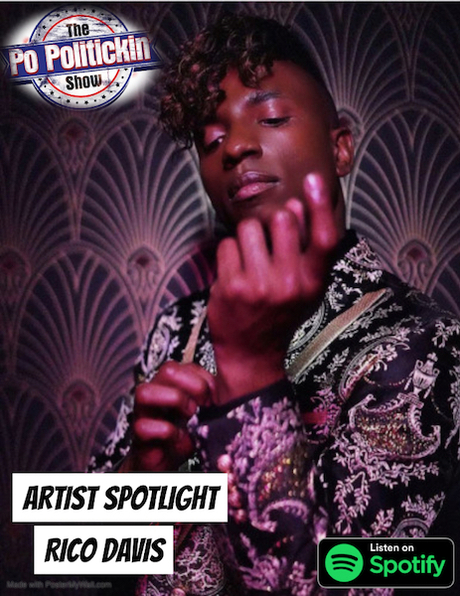 In this episode of PoPolitickin, we politick with Singer, Songwriter, Entrepreneur, Rico Davis.

Born and raised in Camden, New Jersey, Rico spent the first four years of his life homeless, until his mother was finally able to obtain employment and home for Rico and his sister. Rico’s source of escape was his love for dancing and singing, for which he was frequently bullied in school. It was not until Rico was accepted into Creative & Performance Arts High School that he received the community support and acceptance he deserved. It was during his tenure as a member of their exclusive choir, that they won the esteemed International Days of Coro Competition in Italy, competing against choirs from 30 participating countries.

After graduating high school, Rico struck out on his own and moved to New York City to pursue a record deal. In between writing, vocal lessons and rehearsals, he took odd jobs, and ultimately spent many nights sleeping in stairwells, trains, and parks in order to stay afloat. Along his journey, Rico’s passion for homelessness and social issues became stronger. Rico encountered that many deals that crossed his path did not offer him the creative freedom he desired. It was those experiences that Entertainment, a multi-media company with the mission to provide music and content innovators with a platform for self-expression.