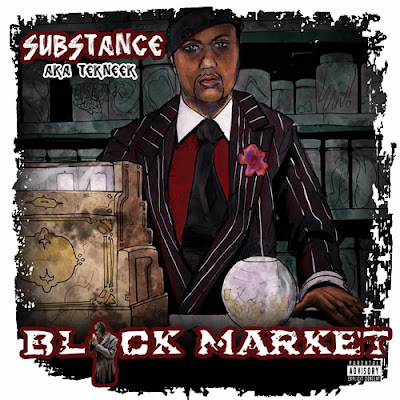 If you’re a fan of music, especially hip-hop, then I’m sure you have not been happy with some of the stuff that you’ve heard lately. Video and radio shows have turned the game into a pay for play scenario where the well funded and well hyped are pushed down our throats while the truly talented fight amongst each other for spotlight.

But 2009 has brought forth a renaissance of sorts for the hip-hop world. New artists have emerged on the scene pushing music with feeling, passion and purpose. One of those artists is Michigan native Substance. His album “Black Market” is one more peace in the real hip-hop puzzle.

Backed by the production of Astronote, Young Blaise, Oddisee and Substance combines street corner poetry with a back-pack mentality.

His lead single “I Don’t Kno” showcases Substance at his best. Lost friends, fake friends and all those in between get addressed as he outlines his long road to the top. Lines like “You mean to tell me cause you knew me coming up, when I come up in the club then I own you a couple million hugs” give you a glimpse into the soul of an up and coming artists trying to keep it real at all times.

Promising that “this aint that bubble gum shit you used too” he pairs up with Boy Phresh to drop the street anthem “Husslin” The Chysty beat is reminiscent of the Clipse “Grinding” Substance and Phresh take a minimalist track and turns it into something worthy of replay value.

“Feels Good” ft D.O will remind some of early Slum Village material but Substance isn’t biting SV. He bounces effortlessly from bar to bar bragging that “I aint going far, you can catch me on the map like Onstar” Produced by Kosyne the soulful background adds to the diverse sound of “Black Market” overall

The albums stand-out track would have to be “Get What you Want” I agree with Substance about the song “This should be considered terrorist actions” The track really takes you back to the early 90’s when that boom bap sound was what you heard over the airwaves. Bar after bar, he bullys the beat. Thanks for Cutz for the scratches, it sounds like Preemo was resurrected.

“Black Market” is the perfect title for the LP. The disc seems like something that only a few in the know would know about. Make sure you’re one of the few to know what’s going on.