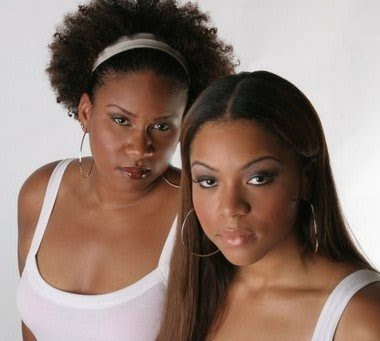 Po: Thanks for stopping by “Po Politickin” I appreciate it, for the first question, can you tell the listeners a little bit yourselves?

ANTEA: No problem! Glad to have this chat! I’m Antea (pronounced an-tay-yuh) A.K.A “Big Sister”. I’m the lyrical half of APLUS as well as the vocal coach/trainer. From Detroit, born and raised!

ANESHA: Thanx for having us! I’m Anesha A.K.A “Lil Sister”. I’m the melodic half of APLUS as well as the vocal producer. Born and raised from Detroit, Michigan. Woo hoo Go Lions!! Cough, cough lol

Po: How it is being sisters and working together? Do yall get into a lot of fights :)? How did your parents feel about you following this career path?

ANTEA: I personally think it works out pretty well. We know each other inside and out which gives us a connection that a lot of writing teams won’t have. We’ve been doing music together since Anesha was a lil tike… about 6 or 7 and I was about 10. We aren’t the fighting type… in my opinion.. (Anesha may disagree

ANESHA: Working together is easy. We always seem to ride the same wave length. Like Antea mentioned, we’ve been creating music together since I was a child. Creating is second nature to us. Its BIG FUN (inside) lol. However, I beg to differ on the fighting tip. I just had to knock Antea out yesterday lmbo. Just kidding. Nah we definitely have our disagreements but in the end we come together and make things happen. I love my mommy and daddy! Our parents have ALWAYS supported us. They are DEFINITELY our biggest fans!

Po: How was it growing up in Detroit? What are your opinions on the former Detroit “Hip-Hop” Mayor Kwame Kilpatrick?

ANTEA: Detroit birthed two great songwriters. That says a lot about our city. I cant front, yes it isn’t the safest place to abide but God has always covered and protected us from the stupidity of the streets of Detroit and kept us exposed to things that are positive. To talk about Kwame….. wow. What do you say? Honestly, my only opinion about it is this; No matter your public position, spiritual relationship or financial ranking, you can get caught up. Kwame Kilpatrick is a great example of this. Good guy that just got caught up. We definitely pray for his wife and sons who have to take the blunt of this while he serves his time. It’s unfortunate…

ANESHA: I love my city. I REP MY CITY!! Fortunately Antea and I have pretty much spent our entire lives in church so positivity and most importantly GOD’S protection has kept us from the streets. Shout out to Greater Grace Temple Detroit where Bishop Charles Haywood Ellis III is my pastor (ghetto). I still sing in the choir and praise team. I believe in being grounded and STAYING that way no matter how famous or known you may get. Meanwhile….Kwame….sigh. Well…like Antea said, people are human and we WILL make mistakes. He is definitely a good dude that got caught up, for rea,l but at the end of the day no matter what good deeds you’ve done, if you do wrong you have to face the consequences just like everyone else. His family is still in my prayers. I still love you Kwame!! : (

Po: I read that you are both are classically in voice, piano, theory, composition, harp and guitar. Can you discuss how this training has benefited you with your songwriting?

ANTEA: From my perspective, it allows me to see the music rather then just hear it which gives a HUGE ADVANTAGE over those who aren’t formally trained. The spectrum of creativity is much more vast because of my exposure to formal training, not just the radio and popular music. Not to mention, while we are on the come up, I have a GREAT side hustle teaching voice and piano!

ANESHA: For me as a vocal arranger being trained has definitely made me more opened minded melodically. Of course knowing how to play the guitar assists greatly with producing. My main instrument is voice. Knowing how to do certain things vocally separates A PLUS from others. You can hear the classical and technical influence.

Po: In 2005, you inked a non-exclusive agreement with Grammy Award Winning producer and music industry mogul Rodney Jerkins. How was that experience been?

ANTEA: It has been a crash course on songwriting and the music industry at large. We’ve learned a lot!

ANESHA: A Plus wouldn’t be A Plus if we weren’t given the opportunity to flex our writing and singing muscles. Being up under such greats like Rodney, LaShawn Daniels, and Freddie has played such a HUGE roll in molding us into who we are as songwriters today. It has definitely been an experience!

Po: As songwriters, you have worked with lots of talented people, Brandy, Mya, Beyonce and, one of all-time favorite artists, Tamia. Can you talk about your collaborations with them? What did you learn from each artist?

ANTEA: All artist bring something different to the table and every experience has helped me to grow as a lyricist. Most artist want one of two things portrayed in their songs. They either want the “real them” or the “character them”. No matter which one, you have to QUICKLY be able to cater to that. In my opinion, that has been the greatest lesson learned so far! My favorite collaborations would have to be Ciara. In the booth she is SO creative and focused. It was a pleasure working with her. Beyonce was also a favorite because you would expect such a BIG artist to have a snooty personality but she is SOOOO far from that! Talk about a sweetheart! So personable and grounded but, of course, when she got in the booth you remembered WHY she is BEYONCE! A talent out of this world!

ANESHA: Its amazing every time we’re granted these opportunities. Let me tell you! lol… My most memorable experience was Brandy. She’s my favorite singer in the whole wide world. I got to personally kick it with her as well as mock her runs and her mock mines. I called my best friend Sean when we were in the studio together. I asked if she could say hi to him on the phone, and she said YES!! LOL I don’t wanna sound like a weirdo but it just made me feel like we were the best of friends. Then I came back down to earth and realized…. Anesha, your just a fan : ( . I pray we get that opportunity to work with her again. So far with every artist I’ve met i’ve been impressed as well as surprised at how down to earth they are. Especially Beyonce! I mean… she’s the epitome of a southern belle. Very sweet individual.

Po: You have work with a lot great artists but who would you consider your musical influences?

ANTEA: Honestly my musical influences are not famous people. Mrs. Ross, my high school choir, theory and harp instructor guided me down the path I’m still on today musically. My greatest musical influence though would be my father. My first piano strokes, singing notes and lessons on songwriting all came from him and he is STILL a voice of reason and teaching within our career path as APLUS.

ANESHA: Antea, I’m not copying off you (lol) but our answers are similar. A lot of me knowing how to do what I do today goes back to my father exposing us. He’s a singer and a DARN good one at that. He grew up in the music world so with his expertise and experience we’ve been able to dodge a lot of bad situations in the industry. Nina Scott was my classical influence which plays a HUGE roll in my creative ability. I mean she is the reason why I’m not afraid of flying anymore but that’s a whole other interview. I love you Brandy and Kim Burrell! (Crazy fan)

ANTEA: Firs time we heard it on the radio, we were in South Jersey, on the Parkway… we got OUT OF THE CAR and danced in the middle of the expressway… DODGING CARS and the whole nine!! Needless to say, it’s a feeling unlike any other!!!

ANESHA: Antea spelled it out perfectly. There’s no feeling like hearing your song you created on the radio. I mean we were on the parkway in NJ dancing around dodging cars. Lmbo. An amazing moment i’ll never forget!!!

ANTEA: Wow. That’s a LOONNGG answer… I’ll give you the short version. I see us flourished in our sound and respected by the industry and music lovers alike because with that respect comes the song placements, the # 1’s, the awards etc… But MORE then that, I see our melodies, our lyrics being apart of somebody’s story’s. Somebody’s fond memories. Our music and our message changing someone’s life for better. Because we don’t write for the fame, for the money but for someone to hear SOMETHING that we say (in and out of our lyrics) and be encouraged to aim higher, dream bigger. I know it sounds cliche-ish but it really is how we feel. The both of us can remember hearing great albums like “Never Say Never” (Brandy), “II” (Boyz II Men) “Thriller” (Michael Jackson), “My Story” (Dietrick Haddon) and SOO MANY OTHERS and can associate LIFE CHANGING moments with those projects…. That’s what I want our music to be for someone…..

ANESHA: Well after Many #1’s , a couple Grammy’s, and 1 wedding later (ahem Antea..lol) I’m sure we’ll still be writing great records. My album will be out by then. I’ll own a beautiful home and a nice vehicular device lol. Possibly engaged. WE PLAN TO BE HAPPY!

Po: What advice would you give to aspiring artists?

ANTEA: Best advice I can give is NEVER GIVE UP! This is a tough industry but if you believe in what you do and you KNOW that its what you are supposed to do then DON’T TAKE NO FOR AN ANSWER!! Surround yourself with people who you trust who are WISE and PUSH FORWARD!! Great scripture from the Bible says “The race isnt given to the swift or to the strong but to the one who endures until the END”… This is the music industry. A race. The winners aren’t the ones who get there fastest. The winners are the ones who hold on until the end!!

ANESHA: It can be REALLY discouraging when you first start pursuing a writing or singing career. SO MANY doors shut in your face but the key is to NOT STOP! You can’t stop. Antea and I can attest to that. We spent soooo long hearing people tell us we were corny, wack, dated, and everything else under the sun. You have to take that negativity and throw it into your drive, your persistence, your energy, and your music. Rejection builds character and molds greatness!

Po: Do you have any current projects? Where can we check out more of your music?

ANTEA: Well of course we did “Make Me Sick” on Danity Kane. “Better Man” on new artist Noel Gourdin and we have Trin-i-tee 5:7’s (Contemporary Christian artist) single “Get Away”. Look out for our record “I’m On” on Ciara’s ‘Fantasy Ride” as well as Jennifer Lopez (can’t give to much info on that one

ANESHA: Antea’s statement says it all

Po: Once again, thanks for stopping by “Po Politickin”. Do you have any last words for the readers? 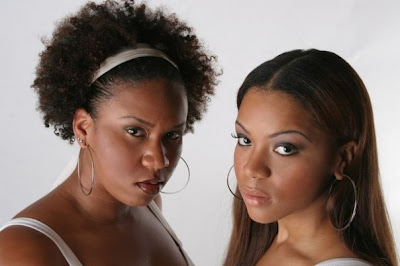