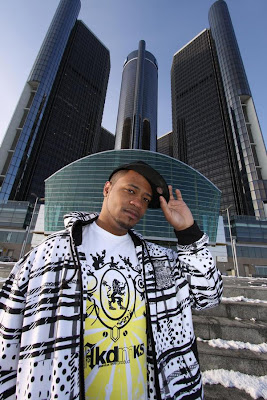 Detroit is know for many things. Ford Motors and rampant crime are the first things to come to mind, but hip-hop isn’t too far behind.

Eminem and his D-12 crew might be the biggest names, but Trick-Trick, The Cheddar Boys and Fat Kat are some of the talented underground acts that really make the Motor City go.

Up next is 20/20 The 7 Mile native has a flow and style that resembles none other in the D. His single “Arrogant” has the potential to break big on the mixtape circuit while his own mixtape “My City Screamz” is earning him rave reviews.

Po Politickin got the exclusive with 20/20 to talk about his hip-hop influences, his style and why the game needs him

Po Politickin: State your name and where you’re from

Po Politickin: What sets you apart from other emcees today?

20/20: What sets me apart is that I’m an Emcee and not a rapper. I hear a lot of singing in hip hop right now and its cool…but not what you’ll hear from me.

Po Politickin: So what are you working on right now? Do you have a mixtape?

20/20: Right now I’m working on a mix tape called “In Hindsight”. Its me doin my thing to some classic J. Dilla joints. Some 9th wonder joints and some original tracks. It’s the follow up to my “My city Screamz” mixtape. You can find that on Datpiff.com.

Po Politickin: Why do you think record sales are so low right now?

20/20: I think record sales are so slow because of the quality of music and the game is changing . It seems like we have one type of rap now because nobody is true to themselves. Everybody is just doin what’s hot.

Po Politickin: Where will we see you at in a years time?

20/20: Hopefully this time next year I’ll be signed to a major but the business has be right for that to happen.

Get at 20/20 at twitter.com/dboy_twenty or check for him at myspace.com/2020detroit