TRIBECA-GRAND represents an unprecedented culmination of nearly 50 years of combined professional experience, and a shared cultural experience in Hip-Hop dating almost back to day one. The Bronx is the birthplace of Hip-Hop. Philadelphia is the home of the first Rapper to win a Grammy. From the hood to Hollywood, this team represents the essence of all the best Hip-Hop has to offer. TRIBECA-GRAND were destined to play the Sport Of The Gods.

TRIBECA is an accomplished MC, Producer, Songwriter, Author, Bronx Representative and more. His credits and affiliations include Camp Lo, KRS ONE, Guru of Gangstarr, Beat Brokerz and Pharoahe Monch with whom he recorded the ESPN anthem My Life. Having risen through the ranks: from spittin’ on street corners in The BX, to recording and publishing deals, to touring the globe, TRIBECA prides himself on constant evolution.

GRAND AGENT is an MC, Lyricist, Playwright, Visionary, and proud Philadelphian -among other things. He has recorded or toured with Pete Rock, Large Pro, Lord Finesse, MOP, Hi-Tek, Common, Madlib, Smif-N-Wessun, Planet Asia, and the list goes on. Operating in the media-at-large as a proponent of the culture, GA has become known for fearlessly pushing the envelope of Hip-Hop expression.

Together these artists, each respected in his own right, have emerged with a brilliant lead single from their forthcoming album, Sport Of The Gods. Take A Knee is an anthem that is both timely and timeless, as grimy as it is inviting. It’s bigger than Kaepernick. It’s bigger than Trump. And, to quote Dead Prez, much like our current political climate, which the record captures so perfectly, “it’s bigger than Hip-Hop.” Take A Knee was released on TGR (TRIBECA-GRAND Records) October 17th, 2017. Digital aggregator Soulspazm, Inc. has placed the single on Apple Music, Spotify, Tidal and others top tier streaming services.

Q1 – Thanks for stopping by to politick with us. I was reading that you guys are originally from the Bronx ? Can you discuss your background and how you fell in love with music?

TRIBECA: What’s up! Actually, TRIBECA-GRAND is a 2 man group.. myself TRIBECA I’m from the BX and my partner Grand Agent is from Philly.. We’re are a BX-PA connect.

GA: I fell in love with Hip-Hop naturally, just growing up as the culture was growing up. I did it all in the beginning DJ, B-Boy, Graffiti. I landed on MCing because I saw the power of the platform once I heard The Message.

Q2 – Can you talk about your group name, how you got it,etc?

TRIBECA: Simply enough, we used our names, threw a dash between the two and TRIBECA-GRAND was born. My name TRIBECA was a name I picked up through the early years, I went from Tristar (had to change that for legal issues) The I went to Triangulah and then finally TRIBECA which stuck with me through the times.

GA: Grand Agent basically translates to being a vessel for big ideas. I try to stay true to whatever inspiration is giving me to talk about. A lot of times that’s been outside the “norm” of Hip-Hop topics or “typical’ Hip-Hop presentation, and sometimes even contradictory to what Grand Agent is “supposed” to represent. Nonetheless that’s the meaning and M.O. of Grand Agent.

Q3 – Who would you guys compare your self to musically?

TRIBECA: Musically our vibe differs.. Mobb Deep may come to mind when it comes to the grit, raw sound that the music possesses and our back forth style is a ode to the early groups like RUN DMC.

GA: For me it’s like Mobb Deep meets Naughty By Nature, with maybe a lil’ taste of Gangstarr and Outkast.

Q4 – Who is your most dedicated and loyal fan?

TRIBECA: Lol that’s something I want to know myself. Besides rooting for ourselves, I would think anyone that has been with us as solo artists to now gets that title.

GA: I have met people at shows who have showed up with all my releases. I’ve had a few people tell me I’m in their top 5. I’ve had comments on iTunes and YouTube that rank me above Kanye, Lil’ Wayne and others with bigger names. But I’ve never had someone come up to me and say “I’m your most dedicated and loyal fan.” I would think the most dedicated TRIBECA-GRAND fan -as a group- will soon be identified as the Traditional Rap fan, or Adult Contemporary Hip-Hop listener.

Q5 – Can you discuss your current projects and plans for 2018?

TRIBECA: Right right now, we are full steam ahead with the first single “Take A Knee” which is gaining traction throughout. We are in full promo mode with this record while we complete mixing and mastering the full length LP entitled “Sport Of The Gods” which should be out some time early 2018. We plan to tour to support the music as well as work on new material.

Q6 – Can you describe why you came out with “Take A Knee” now? Is there a music video for it?

TRIBECA: The song came together rather quickly. Grand Agent and myself were plotting on ideas that’s worked for both of us. We knew our theme would be “Sports and Hip-Hop” so we wanted to stick with ideas like that. Grand Agent came up with the idea of Take A Knee.. like let’s report on the real reason Colin Kaepernick started his peaceful protest. We wanted to make sure people were reminded that he was protesting police brutality against people of color.

TRIBECA: I would definitely recommend that they go back and listen to my song “Cold World” or “ESPN’s The Life (Theme) featuring Pharaohe Monch”. Those tracks embody what I represent!

GA: As TRIBECA-GRAND, I would want them to hear the current single “Take A Knee,” because it’s a trademark song, and I believe we’ll be immortalized for it as a cultural landmark of the times. But I would definitely want them to hear some of our earlier work, specifically The MEGA EP.

Q8 – Have you worked with any famous producers, artists?

TRIBECA: I came up under the tutelage of the legendary Hip-Hop group Camp Lo. I’ve also had the opportunity to share the Mic with Masta Ace, Lord Tariq, Pharoahe Monch and many others. I have production credits with KRS-1, Camp Lo, Joe Clair to name a few and many television shows and networks.

TRIBECA: First thank y’all for Politickin with us! You can find us on all Social Media platforms @SportoftheGods (one word). The single “Take A Knee” is available on iTunes, Tidal, Spotify, Amazon and everywhere else digital music can be found. If y’all need us for bookings hit tribecagrandinfo@gmail.com

GA: We just want to thank all the early support for “Take A Knee,” and encourage the audience to support artists that have been and remain true to the culture of Hip-Hop and the original ethos of Peace, Unity, Love & Having Fun. Also, be sure to get up on TRIBECA-GRAND’s history as solo artists at www.GrandAgent.net and www.TribecaWorld.com . Most importantly, go to www.TakeAKneeSong.com and check us out. 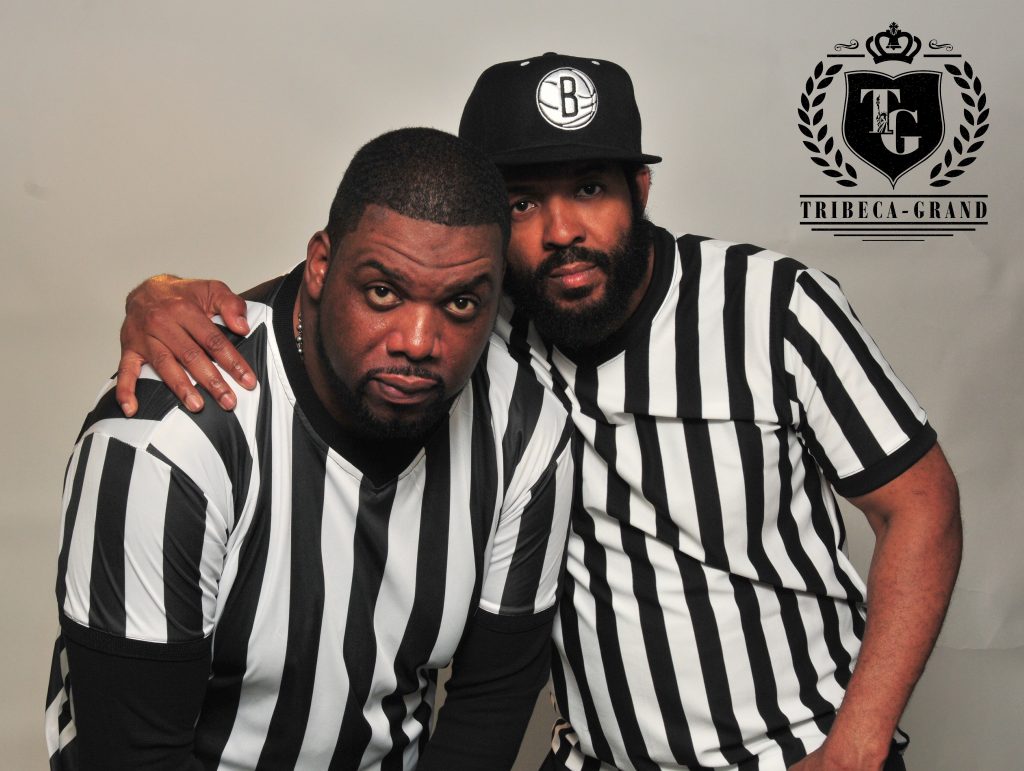