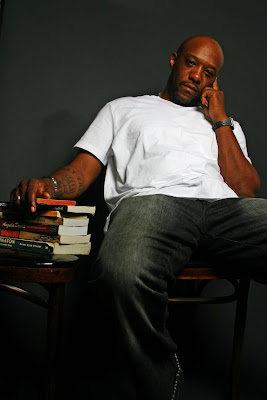 Hip Hop is a culture that was created by and for the people, and when it comes to exibiting that love and passion for the art, nobody displays it like Kil Ripkin the Genereal, AKA The Ghetto Correspondent. Describing his music as soulful, truthful, spiritual and rebelious. Kil stopped by Po Politickin to discusses his musical career thus far.

Po: Sup Kil, thanks for stopping by. For our first question, could you describe a day in the life of Kil Ripkin?

Kil Ripkin: I wake up early in the morning, usually express my daily appetite by letting my pen touch the ink. Once I’ve hit either a sixteen or more, I wake my family up, and then depending on the day, I either hit the studio or the job. I do what I need to do in the studio; some cats go to the studio and smoke or drink and relax. I’m the opposite. I go into the studio prepared with a plan to one take and leave. I’m all about staying focused right now. Once I leave the studio I come home and spend time with my family. I usually contact my manager, Phill Roche, to make sure we are on the same page. I review potential beats, shows, and suggestions.
But I really don’t have a typical day. I could be shooting a video in New York with Torae one week, and the next week doing a photo shoot or playing a show. In the music business I feel a typical usually doesn’t exist.

Po: By listening to your music, I could tell that you are a very revolutionary and conscious artist? Could you discuss this? Do you believe that you will be able to reach mainstream with this type of music?

Kil Ripkin: My music is all based on my character. It is so important in my values to always maintain the truth. The revolutionary reference is something people have labeled me, but I guess it reflects the experiences I have gone through and my story, so if you want to call it a revolutionary one I’m not mad at that. I definitely have been able to reach the mainstream with my music. The more music I put out the more I realize I have no Kil Ripkin fan demographic. I mean for me to come out Coney Island what some refer to as the hood and have fans in the Hamptons is direct evidence that I am reaching the mainstream. Also what you’re seeing is a overall call for more music with integrity and spirit, people are sick of the garbage.

Po: Who were your musical influences and what would be a dream collaboration for you (Rapper, Singer, Producer)?

Kil Ripkin: Growing up in New York my musical influences were the rappers that were in my neighborhood or in my borough. Hands down Notorious B.I.G. because you could take him and have him flow over anything no questions asked. I would also say other pioneers from New York, Rakim, and Slick Rick. But I would definitely say Rakim for his complex lyrical crafting.

Po: We met thru the world wide web lol so I wanted you to discuss the importance of the internet to artist.

Kil Ripkin: The internet is an extremely helpful and reliable tool for marketing and exposure. Today it seems to be a lot more about social media, such as Facebook, Twitter, Myspace and more than going store to store with a tape. If you become an internet sensation the whole world now recognizes you, so the net is extremely important in the music business.

Po: What’s your current label situation? Do you have any current projects out?

Kil Ripkin: I am signed to Soulspazm Records out in New York. I have four projects completed and a handful of videos waiting to be released. The first of these projects will be released at the end of the summer. I got a mixtape coming out with Chicago producer, The Exceptionalist, Tony Roche. I also have a project coming out with Atlanta producer, Raticus, and of course the album, The Balancing Act. I also have an album finished with Torae for our group The Coalescence. Besides that I am doing collabs with a lot of cats, but I can’t really talk about it because it is still early.

Po: Thanks for stopping by homie, appreciate it, could tell us where we can check out more of your music?

Kil Ripkin: Check me out at myspace.com/kilripkin, 2dopeboyz and type Kil Ripkin in. All the blogs out there, twitter.com/kilripkin. Look also for a website dropping soon at www.kilripkin.com