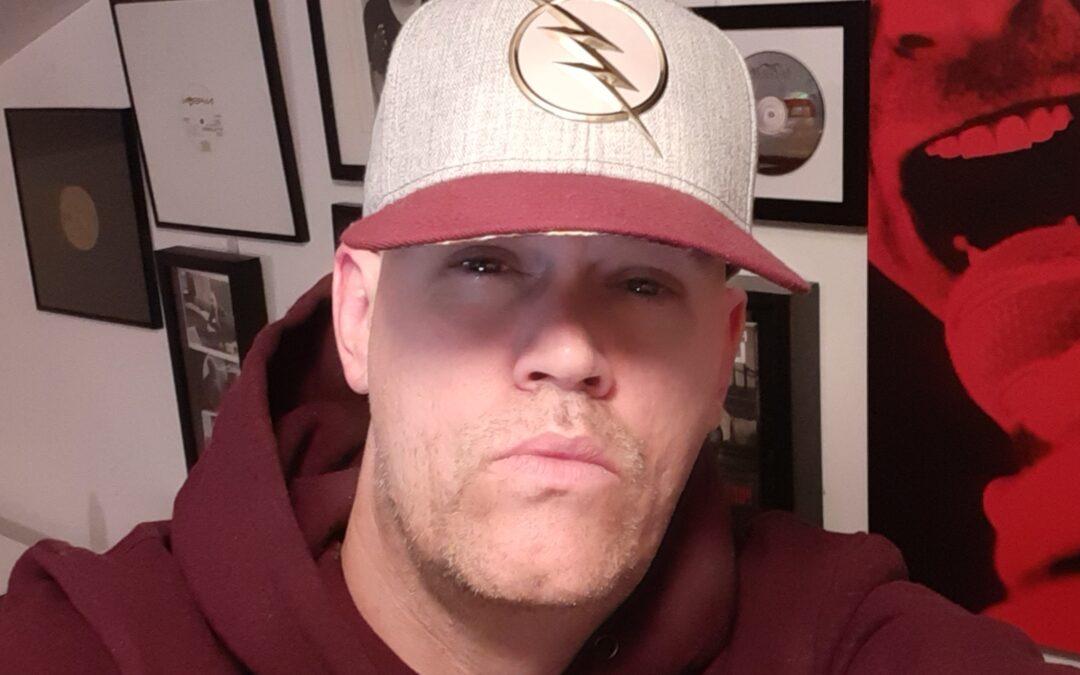 Professor Lyrical is a Hip hop artist from Lowell, Massachusetts, who was also a university professor in Boston. He is now an associate professor at the University of the District of Columbia where he also serves as a Director of Faculty Development and lives in the DC area. Wikipedia

Q1 – Thanks for stopping by to politick with us. I was reading that you are originally from the Boston area?  Can you discuss your background and how you wanted to do music?
Q 1a- Who exactly is Professor Lyrical?
I am going to borrow a catch phrase from my man Bernard Hankins who does a live stream with me and has coined our catch phrase: “Social introvert & creative extrovert.” That kind of defines me well. I take emceeing and lyricism as a craft, much like a professor takes seriously their craft. It requires lots of alone time to research, create and practice.
I’ve dedicated an easy 20,000 hours to it, I’ve performed and spoken at over 100 college shows and have probably done over 700 shows in total. I was first known as Lord Plourde (of X-Cal), then Lyrical Lord Plourde, then just Lyrical for many years performing solo and in the Cambridge based rap group Invasion. Now, those who’ve known me a minute still simply call me Lyrical, but more and more it’s just Pro.
I’ve tried to live a life that allows me to do, and be around, the two things I love that both have very flexible schedules, namely education and Hip Hop. But I like to think of myself as most of all a great dad to my currently 8 year old son and I am all about self-betterment and try to instill that in him as well.

Q2 – Can you talk about your artist name, how did it come about?
These days, being a professor makes the name a no-brainer as for years people simply called me Lyrical. I have a Doctorate from Northeastern where I taught as an Assistant Teaching Professor for several years and a masters in Math from UMASS-LOWELL where I also earned my Bachelors. Once I started teaching college, the name made lots of sense and I’ve run with it since putting “Professor” in small print above the “Lyrical” on an album I did with my students in 2009 called The College Project.

Q2a.-I’ve seen you have been around since the early ’90s did that have an impact on your career?

Yeah. I was in Zulu Nation Battles and the Battle for World Supremacy in New York in the mid nineties. Battling has always been a big part of what I do as an emcee and the energy I often bring to what I do. Truthfully I was on vinyl that came out in 1989 called Twist on Dis produced by Luis “Col” Medina who was also from Lowell. He produced it in 1987 and was looking for rappers to put on it. My group X-Caliber was always hanging out at the UMASS-LOWELL radio station (before we were even in college) where DJ Diamond Don Saunders would play Col Medina mixes and our demos. That has influenced our hustle and it was college radio again in the mid nineties that led to us meeting our future musical mentor Ski Beatz who has produced tracks for us recently as well (including my man Fee the Evolutionist from X-Cal for his new song “Back in The Days” featuring his lady Ruby Shabazz and I, which makes it an X-Cal reunion track) since he was recording Jay-Z and Camp Lo in his crib and at D&D while we were waiting to get on the mic right after. That will change you!

Q3 – What do you do besides music?
I am currently an Associate Professor of Mathematics and a Director of Faculty Development at an HBCU in Washington, DC (The University of the District of Columbia). Because I have summers off, and a good chunk of time in the winter, I’ve been also able to stay in shape by playing lots of basketball and I also officiate whenever I can.
[This is extra info if you want to add in you can, but not necessary]
I was recently officiating a game and the assigner of high school, traveling/rec and college baseball was in attendance watching his son play. He approached me and told me I’d be a natural. So, I followed have up, and have gone through umpire training as well so hoping to get out on the diamond really soon! You have to be smart with whatever else you do when you are a rapper or you can easily have no time for the craft. These kind of flexible and healthy “side hustles” like being a professor and official make it possible. Way harder for those doing traditional 9-5 jobs that are also 12 months, so in that regard I’ve been very fortunate and it allows me to be in it for the long-haul which has been my goal since I was about 14.

Q4 – Who is your most dedicated and loyal fan?

Hmmm, there are a bunch that come to mind but, most recently, I would have to say Trina (from Massachusetts). She never misses one of our Live Streams called The ProQuo Show on Friday nights (and my newer second show called IntroVerse on Sundays) and she is very encouraging and has all the new music from my duo ProQuo and my solo stuff as well.

Q5 – Can you discuss your current projects and plans for 2022?
I did a “ProQuo” album called iNSTANT BROTHERHOOD with my partner in rhyme Jay “Quokane” Cruz also distibuted by FCB/Sony Orchard. So far, we made one video single called “Final Fire.” And we are trying to get “Freedom Corner” out there next–featuring our homey and our Freedom Corner Brand lablemate F.L.Y [note: the lack of a period after the Y is intentional] as well as a couple more singles this summer and fall. Look out for “Dive in It” as well! We have actually recorded a whole other album’s worth of material that you may hear in time.
I am also working with my long time homey Fee from X-Cal as I mentioned earlier. I am on a couple of his tracks and we talk daily about more music plans. I have scores of solo singles in production (shout out to #iBHood and Calvin Krhyme “Maskoraid”) and many are completed. Check for my forth coming song “Dark Poetry,” later this summer and into the fall dropping in conjunction with the release of the feature film “Montreal Girls” directed by the amazing Patricia Chica. Dark Poetry is the lead single and runs through the opening credits and first scene in the movie. I continue to work on music synch placements and writing for others, such as corporate partners, as well as speaking and doing performative PD work for institutions and organizations everywhere.

Is there a music video for it? I call it medium-fi, it’s a chill Jay Johnson beat. It still knocks, so not quite Lo-fi but has a nice soulful feel and sort of tells my musical biography and how I’ve embraced the “Pro” in the name Professor Lyrical. A talented friend in the industry known as The Angel was helping me land a couple of synch opportunities I was speaking on and when introducing me said “not only is his name Pro, but he is a pro as well.” So, I ran with that theme and talked about the mindstate and what has gotten me this far. I think the vibe of it lends itself more to an enhanced lyric video more than a full out video with me all up in it everywhere. Working on that today in fact!

Q7 – Have you worked with any known MC’s/Singers/Artists,etc ?
I have historically not been a big colab guy, but I am coming around. My wife is a world-class singer and she has been on several of my songs especially those produced by my man DJ Shame. I have been on tracks with so many though over my career, such as: Ruste Juxxe, Daniel Laurent, Mann Terror, Letia Larok,The Foundation, Brix, Jake the Snake, illin’ P., Rip Shop, Tribecca, and in addition to Ski producing tracks for me I’ve worked with the homey M-Dot, Syntax, D-Tension, Michael Bivens, Nyda, Iroq, Jay Johnson (of iBHood who produced Yo That’s Pro), Decap, Session, Nelly Protoolz, Robie Rowland, Legendary (J. Brown) etc. I’ve performed with countless legends, but appreciate those like Super Natural, Dres from Black Sheep, Cappadonna, and Immortal Technique who have always made it about more than just the music with me over the years and have maintained consistent as well.

Q8 – Being from Boston area, Boston is part of New England, is there more to the New England Scene than just Boston?
Yeah, I am originally from Lowell and that is where I learned to hone my craft and skills. Everyone is familiar with what happens in Greater Boston and certainly Greater Lawrence and Worcester have also continuosly pushed the craft ahead with talented artist always emerging and many now pushing it globally ahead. So many more spots in Massachusetts alone, New Bedford, Brockton, Fall River, even the Cape has dope Hip Hop. Rhode Island is full of talent, shout out to Grind Mode and my man Lingo (we met on the battle circuit, Iron Mic, Superbowl Battle, etc.,). Fee is up in Nashua, NH and is constantly promoting and pushing that area, even Maine has talent and I’ve done plenty of shows in VT, and Connecticut as well. So yeah, it’s well represented.

Q9- Thanks for coming thru. Anymore words for the readers, where can we check out more of your music?
Thanks to the good people at Po Politickin for politickin with Pro!
www.ProfessorLyrical.com and Google Professor Lyrical, as that is the name to search via my socials as well.