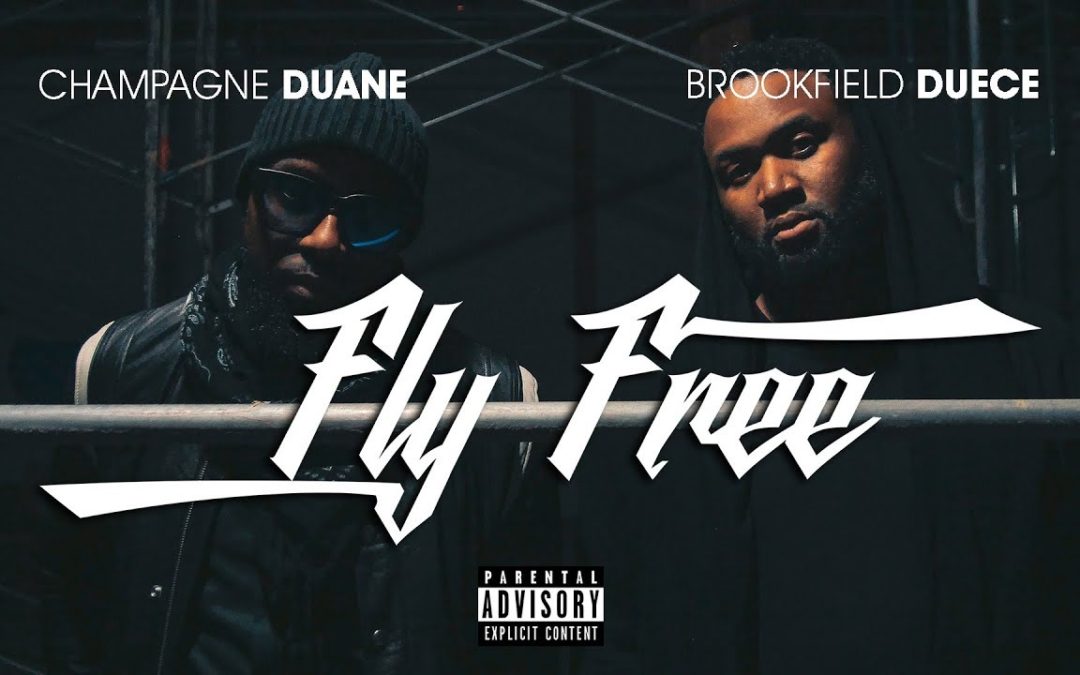 West Coast Artist Champagne Duane teams up with Front Page Music’s Brookfield Duece to deliver “Fly Free,” a powerful political statement produced by Portland’s own Cee Goods.
“Fly Free” highlights the injustices of oppression while offering enlightenment and encouragement to dismantle the chains and seek a higher plateau. Duane sets the tone with brooding messages for racists and bigots while taking a jab at political leadership for their insensitive rhetoric and forceful treatment of humanity. In the lines, “How do broken taillights turn into broken hearts/that’s when you realize that it was broke from the start/we put to bed by 12, hands up high like midnight,” he begins to outline the tragedies of senseless police brutality. Duane finishes the verse with clever wordplay on lines like “they just want to pop and lock and we just want to pop and lock/ we just want to wear our locks and they just want us wearing locks.”

The beautifully sampled hook smoothens out to the sound of Duane offering a different perspective: Fly free, spread your wings. Fly free, better things. The baton is passed to Brookfield Duece who comes in swinging with metaphors: “Hard to fly free in this oil spill, they let us spread our wings with a Popeye’s deal, listen to the stress coming from my bill, all this for the birds if I’m being real.” He goes on to echo the sentiments of Champagne by examining the way citizens are harmfully treated and also makes a call to action to draw the line.
On the final at-bat, Duane picks up where Duece left off, letting it be known that “time’s up” and “we’re done apologizing” for the wrongdoings of others. He gives praise to those who also fought to lift that same burden. His line “went Bald for the Win, now they calling me James” speaks to the wisdom he’s gaining while simultaneously shining a light on James Baldwin’s contributions to activism. Among the others to receive a mention are Huey Newton, MLK, Malcolm X and Angela Davis. “Fly Free” embodies the roots of Hip-Hop in its creative depiction (and at times displeasure) of the cards that have been dealt to our communities and the mindset it takes to overcome and arrive at liberation.
Watch “Fly Free” below now available on Youtube and be sure to stream this powerful new single as well, available on all digital streaming outlets.

More Info on Champagne Duane
It is often said that an artist can change the game, but all too often it doesn’t happen. In the case of Champagne Duane, people should at least start paying attention. Humble and ambitious, he is the definition of hard work and has brought his solid work ethic to the booth. Creative, witty, crafty, smooth and perceptive all begin to describe his approach to the game, but one word you should use is, complete. From the up-tempo tracks like ‘Friday’ and ‘Killin’ Em’ to the introspective ballads ‘Hip Hop Resurrection’ and ‘Same Old Song’, Champagne Duane brings versatility, depth, and a confidence that says, “I have arrived.” And that confidence is well placed in someone who, a product of ’82, has experienced and achieved more than most do in a lifetime. A solid student of the game, his early influences include Nas, Jay-Z, Slick Rick, and Talib Kweli.
His music making began in high school when he produced songs for his church and ghostwriting for other artists, but decided to put recording on the back burner to focus on his chosen career, footwear design. Guyana-born, Florida-raised, Duane Lawrence has always harbored an artistic side. An alumni of Design and Architecture Senior High in Miami, he often found reinforcement in his ability to communicate his ideas visually, drawing from an imaginative personality. That imagination led the former Miami Heat Ballboy to the College for Creative Studies in Detroit where his passion for design, art and music grew. In 2004, Duane’s footwear career began at Converse, near Boston, where he would become the lead designer for NBA superstar Dwyane Wade. Now residing on the West coast, his designs have also been worn by athletes like Dwight Howard, Chauncey Billups, Kirk Hinrich, Elton Brand, Udonis Haslem and Tim Duncan to name a few.
After over a decade in the shoe game, ‘The Champ’ has returned to the booth. Call it a reverse-Kanye, Duane is ready to also have an impact in the rap game. In June of 2015, he released his first full-length project, “A Toast”, a tribute to the Hip-Hop music that influenced him growing up. Stand out tracks include the Jonny Cool-produced singles “I Got You” and crowd favorite “NEED”. Described as sounding like “LL over a Premo beat”, it’s an authentic introduction to the artist and pure addition to the genre. The span of his talent is apparent on the Trox-produced “Triple OG.” Featuring an idol in Talib Kweli, “Triple OG” is an intelligent song in which they articulate the legacy of Black men. Rounding out the project with some vibes from the 90s are the celebration-ready tracks “A Toast (feat. Saeeda Wright)”, “Darling Girl (feat. Jarrod Lawson)” and “Champagne Flow,” where his clever word play is on display with lines like “I’m more Diddy than Fiddy/ I’d rather “no” (know) biggie/ than to have holes in me.”
“The album is refreshing- solid production and delivery. Seriously impressed by the fact that it sounded different from the trending sound, and the content had substance.” – DJ OG ONE [Portland Trailblazers DJ, XRAY.FM Radio host]
Adding to the discography, Duane also collaborated with fellow artist Elin Skei to release Unhappy Valentines in February 2015. The 5-track EP is the love story we’d all like to forget. Champ gets personal on tracks like “She Loves Me Not” and “Want Me Back,” and the two look and sound like a natural fit in the music video for “The Worst.” As if that wasn’t enough, he also released a third video in a  three month span entitled “Pink Champagne”. The year 2015 also saw the development of Champagne Duane as a true performer as he made his way through Portland venues. His refined presentation in tandem with 6-piece band Free Thought Takeover creates a live experience that delivers fine-tailored Hip-Hop over a killer horn section.
Now residing in Oakland, California, he’s got a whole new focus- to master his craft. He looks to package the maturity of his new found voice with even more meaningful music. If his past accomplishments are any indication of the dedication he puts into a project, he’ll be encouraging others to raise their glasses with him in no time.
Break out the champagne!