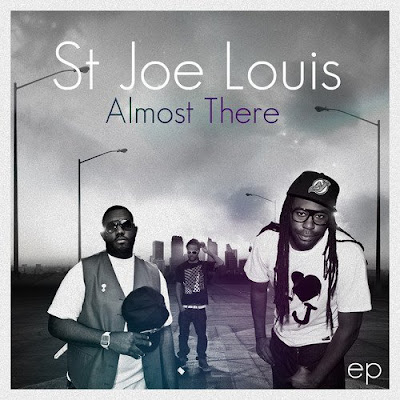 “Anytime you freak one of the most-classic cuts of all time (the Dilla-laced/De La-classic “Stakes Is High”), you’re bound to catch your fair share of good attention.” After several car accidents and losing close loved ones while recording 2 shelved projects St. Joe Louis is sometimes referred to as the Final Destination group. The Almost There FreEp is a step toward changing that outlook as they prepare to finally release there upcoming project 30,000 Ft High and Rising.
“Almost There EP” features PH, Daniel Joseph and others. St Joe Louis is a trio composed of Elete the group’s producer/emcee, Tom Chase (emcee) and Michael Cardigan (emcee). Almost There is produced entirely by Elete and after the pounding drums of the aforementioned classic flip on “30,000″ it appears as if he is up to the challenge.
01.) Intro
02.) 30,000 (feat. Chordz Cordero) (Produced By Elete)
03.) Too Much (feat. Richard Pryor) (Produced By Elete)
04.) Right Away (Produced By Elete)
05.) Electric Co. (Produced By Elete)
06.) Members Only (feat. Daniel Joseph, Rew Mec & PH) (Produced By Elete)
Download Link
Share it: