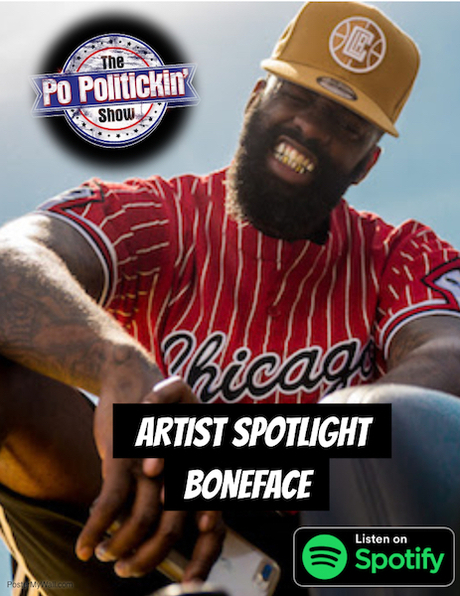 In this episode, we politick with Boneface.

Words best-fitted in describing the personal and lyrical journey of Anwon The Boneface Johnson. Born November 7, 1982, The Boneface grew up in Pensacolas infamous Escambia Arms Projects (aka 3/2 or EA) with the rest of his mothers ten children. His tough-as-nails upbringing and his baptism by fire at an early age helped him build inner character that would help him overcome many hurdles later on. We were packed in the house like sardines. We had an oven for a heater. My moms and pops ran the streets, he recalls. We basically raised ourselves. It felt like it just made us stronger. His never-give-up mentality allowed him to become the first of his siblings to actually graduate high school within four years. Never trying to shake his harsh past, but always trying to build a bigger and better future for himself, he used his schoolhouse intellect to cultivate his lyrical hobby. Initially going by the name Venile, he embarked on a journey with no idea of where it would take him.He was awarded a basketball scholarship to a small community college in Selma, Alabama and did his best to focus on his athleticism as his road to success. But due to financial reasons, he had to go back home to Pensacola. He began hustling and not just drugs and paraphernalia, he realized he had several talents and used every single one of them to make ends meet.

He was the tattoo man, the let me get a fade man, and the come get on this track widely known brother in the streets. Then one day, unsuspectingly, he got a call from Roy Jones Jr. Roy called and asked me if I wanted to go to the Source Awards. I said, Hell yeah! I felt like it was a once in a lifetime opportunity. Roy called a meeting introduced me to everybody and asked if I wanted to be part of the family, as The Boneface thinks back on it.What shouldve been the greatest time of his life quickly turned into his worst when federal agents arrested The Boneface for drug trafficking not too long after he signed his contract. Luckily, the judge saw his potential and only gave him three years probation, which the father of two admits taught him a valuable lesson. He began to really focus. With BodyHead putting most of their concentration on their headlining artists, The Boneface noticed he had lot of freedom with the label. He began working on his first official mixtape 100% Grind.With the buzz his music was getting and with BodyHead no longer putting energy into the label, The Boneface started his own indie label to push himself and a few talented others. He named his label Free Agent Musik.

Several mixtapes and albums later, The Boneface has a robust following of fans. Although most of his fans are residents of the Panhandle area, rest assured his music is enjoyed by those from all over the U.S. His tattoo parlor which services young military recruits has been a successful vehicle in getting his music out to be heard by the masses.Fans appreciate the lyrical ability coupled with his ability to relate. The ups and down in his life translate to stylistic variety in his lyrical genius. Hes responsible for songs like Outside, aggressive street anthems that get the club rowdy. Songs like Slow it Down, doggish sex songs that get even the most innocent of ladies to move their hips. Club dance, hard circumstance, and even romance His latest hit High Heel Shoes ft. AJ gets passionate about his love for music. Always real and genuine in the lyrics spoke, theres something in his repertoire for everyone. The Boneface is a harmonious coexistence of good and evil. He uses his demeanor to relate, teach, and just plain show the people a good time.