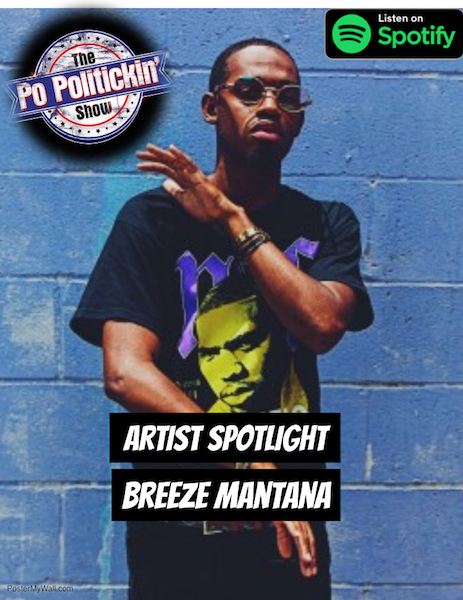 In this episode of PoPolitickin, we politick with Breeze Mantana.

Breeze Mantana Was born in Yonkers,NY and raised in Mt. Vernon After His Mother met the father of his younger brother . At age 9 as a quiet Kid, he started writing raps aside from his main niche which was art, being inspired by two but very important things that made music catch his interest . One being a trip to legendary producer, Pete Rock’s house, a Mt. Vernon native . The secondary being four christmas gifts, Big Pun’s “Capital Punishment, Fat Joe’s “Don Cartegena”, Camron’s “Confessions of Fire”, and DJ Clue’s “The Professional part 1”. He then started to read the dictionary to build his vocabulary, never once revealing himself, till he knew he could outrhyme anyone. in 2005 he met up with Sha from Enta Da Dorm, spitting a 16 over the phone, which later became “Check Please” on the “914” mixtape”.

With 914 the mixtape dropping in the summer of 06′, and spreading around the tri-state, he than dropped “If I Was Signed To Star Trak” in February 07. The mixtape did well, garnering a buzz through a lot of street promotion , he than prepped for the release for his mix- album, “You Only Live 2Wice” which debut in December 2010. The project was an in depth look into the deceptive and tempting allures of the street, on all levels, personal to general. Now Coming Off An 18 month bid from September 2011 He’s now Gearing Up For The Release Of His Forthcoming Album ” American Greed: The Sweetest Revenge”