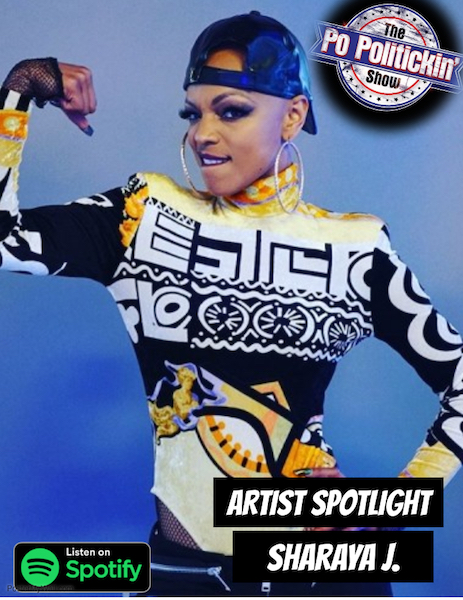 In this episode of PoPolitickin, we politick with rapper and choreographer Sharaya J.

A native Hawaiian, but raised in Jersey City, New Jersey, Sharaya J has always been an artist at heart. She was exposed early by her father who was a member of 90’s Hip Hop group Double XX Posse. Sharaya has always been a natural performer. With a very successful career in the dance industry working with the likes of Diddy, Rihanna, Ciara and Alicia Keys as well as great choreographers like Laurianne Gibson, Fatima Robinson and Jamaica Craft, Sharaya is no stranger to the spotlight. In 2013, after a chance encounter, she landed a deal with The Goldmind Inc. This allowed Sharaya the opportunity to study and work under the legendary Missy Elliott as her protégé. Within the same year, Sharaya J released her debut single “BANJI”. This record not only displayed an underground Jersey Club rhythmic sound, but it also created an international movement. Never slowing down, Sharaya released two more singles, “Takin’ It No More” and “Shut It Down” which set the dance world ablaze. Sharaya J is simply a woman of many talents.

In early 2014, Sharaya J joined forces with Alexander Wang starring in his T by Alexander Wang campaign and becoming a brand ambassador for his line. With multiple features throughout the year including Dazed Digital, Interview magazine and NY Mag/The Cut, Sharaya blazed a trail “to get the people dancin’ again!!!” She even caught the eye of Wilhelmina Models and was signed to their celebrity board by the years end. The oh-so talented Sharaya J even started her own company, BANJI Entertainment. Under that umbrella she released her next single “BIG”; which reintroduced her fans to a more evolved lyricist and an established brand.

In the first half of 2017, Sharaya J dropped her explosive collective entitled “Dope Product – Vol. 1”; showcasing fierce freestyles over tracks from both the past and present. Followed by the release of the single “New Wave” in October. Currently this entertainer, filmmaker, actress and choreographer is working harder than ever as one of the original contestants on Fox Network’s hit show The Four. There’s no telling where her talents will take her. http://www.sharayaj.com/