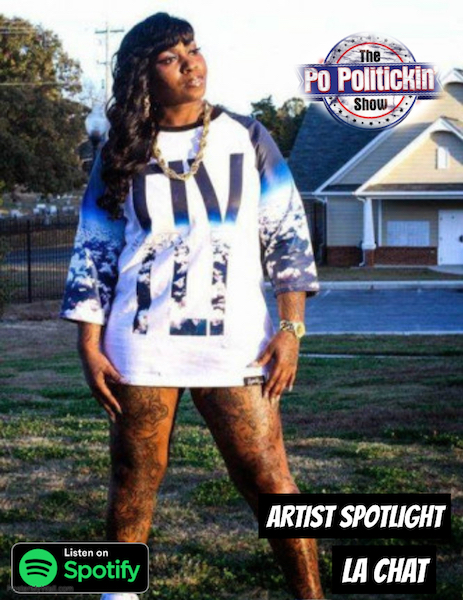 In this episode of PoPolitickin, we politick with Memphis, TN rap legend La Chat. Her name is Chastity Daniels, but mostly known over the world as LaChat. One of the most talented rising female rappers in the industry. Hailing from Memphis, TN, she has always loved hip hop music and considers M.C. Lyte as a role model. She has her own style of music that sets her apart from your typical female artist. She considers herself as being the voice that represents hustling, thug-life and most importantly the street females and mothers. She has helped open doors for up and coming female rap artist. Her career began back in 1998 with the Oscar Winning Group Three 6 Mafia. Her first Platinum feature, with Three Six Mafia, “Chicken Head” was on Project Pat’s album. After that the doors opened for her to become the Queen in Hip Hop she is. She was featured on numerous other projects with Three Six Mafia including “Two Way Freak” and “Baby Mama”.

LaChat has written tracks that were featured in popular movies such as “Baby Boy” and the hit HBO series “Oz”. She also played a starring role in the movie “Choices”. She later released her first solo album. “Murder She Spoke” in 2001 selling over 200,000 units and counting. Since then, she has been released from the group and has released several independent projects such as “Ultimate Revenge” in July 2004 selling over 8,000 units independently and “Dramatized” November 2004 selling over 10,000 units.( Both albums without any major promotion.) She later released her third Solo album “Bad Influence” in November 2006 which is still selling to this day. In between these albums she has been satisfying her fans with features and mix tapes with many major artists such as Shawnna of DTP, Juvenile, Murphy Lee, Yo Gotti, Gucci Mane and Mike Jones,Waka Flocka,8ball to name a few. She has recently started her own record label “Dime-A-Dozen” releasing her fourth independent album “Da Hood Home Girl” in July of 2008.