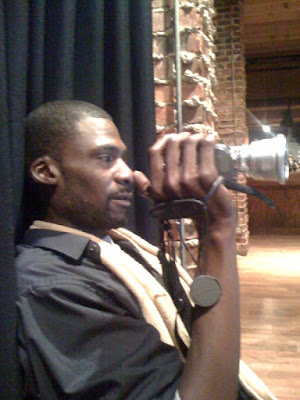 When you think about Charlotte N.C. the last thing that comes to mind is hip-hop. And though there have been several artists to come out the city to make a national impact, the industry overall has turned a blind eye to the talent in the Queen City.

Po Politickin spoke with Mekha himself about why he decided to shoot this documentary and why it’s needed in the first place.

Can you tell me why you decided to film a documentary about Charlotte’s hip-hop scene?

I decided to do a film on the Charlotte hip-hop scene because I feel like its ignored for the most part through out the music industry. There are a lot of talented artists in the city and I feel like they need to be exposed on a bigger level than they have before.

Are you or have you ever been a hip-hop artist or in pursuit or have you always been a writer behind the scenes?

Never! I’ve always been a writer. In 2003 I started an online hip-hop magazine called lastwordonline.com Currently I’m the music editor for wordonthestreetsmag.com and reviews editor for yoraps.com I’ve also contributed work to XXL, Slam magazine, Rolling Out and The Connex List

Did you learn anything about the Charlotte Hip-Hop scene that you didn’t already know while working on this documentary?

I learned that the artists aren’t the problem in Charlotte. I feel like they’re a lot of people who have the “Diddy” syndrome A lot of people call themselves managers, CEO’s, etc but they have more of a need to be in front of the camera or on stage than the artists that they supposedly work for. The artists in the city have a genuine love of hip-hop and really see this being their career, but there are too many people living off these people.

Are there artist or specific time frames that you missed or didn’t get a chance to include and why?

I feel like there were a few, but that’s really how the game goes. I’ve written stories for magazines where I couldn’t interview a certain subject but that doesn’t stop the story for being completed. I’m thankful for the many artists who did sit down and speak candidly about the city and its hip-hop culture.

Who do you think will benefit the most from this documentary, the artist or the general public or the city of Charlotte? All or one in particular?

I would say the artists. They’re aren’t a lot of outlets in the city where artists can see themselves in print or on screen so this could be a great look for the artists who participated.

What was the most challenging aspect of taking on this project?

Time. I also work for several other publications so juggling my schedule for wordonthestreets and Slam as well as keeping pace with the filming for the documentary was the most challenging.

As a result, of completing this documentary, do you see yourself doing more films in this area or do you plan to branch out and do more things in a variety of fields or will you stick to the hip-hop scene?

Yes! We’re in the process of working on the next project right now and I’ve been asked to help work on a documentary that might be viewed on cable later this year. I

If you had to do it all over again, what would you change or do different if anything?

Nothing! Everything went the way it was supposed to. I’m glad that the Actors Theater allowed us to show the film during the CIAA weekend and I’m glad for the support that has been shown.

For more information on Crown Royalty: The History of Charlotte Hip-Hop or Invisible Man Media, contact Mehka direct at invisiblemanmgmt@gmail.com and check out invisiblemanmedia.com