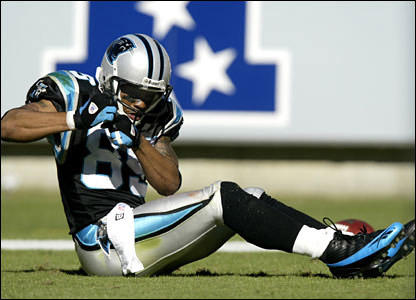 You know how the say star players get special treatment, and can get away with ‘murder’ so to speak. Well with Panthers superstar WR Steve Smith, this isn’t the case. The Carolina Panthers made an example of Smith by suspending him two regular season games for his role in a scuffle with Panthers CB Ken Lucas. There are always scuffles in preseason as playing in pads in the oppressively hot weather seems to get to some guys. While some other guys are just, well, rather annoying.

The scuffle between Smith and Lucas reached its height after both players had removed their helmets during a break for the starters in the middle of a special teams drill. Smith then gave Lucas a cheap shot right in the face. The blow broke Lucas’ nose and now he is listed as day to day. As a result of the skirmish, Smith was kicked out of practice and sent home to Charlotte. He was also suspended the first two games of the season.

A message was sent loud and clear through this suspension. No player, even our best, is above the team. Smith is obviously the Panthers most indispensable player as he is the Panthers loan threat (though I think Jonathan Stewart could change that very soon), and has been the Panthers lone source of consistent offense for a few years now. He is one of the most feared offensive players in the NFL, and his production will be missed.

I think the suspension was warranted but I personally think it should have been a game’s worth along with a $500,000 fine. While I understand that Smith’s conduct was reprehensible the league is still about winning. He is going to miss two games against two pretty good defenses (Chargers and Bears), and in the NFL EVERY game is important. Smith missing two games doesn’t benefit anyone. Now, if the team takes this as a message of accountability, it may help with team chemistry. I know its a long shot but you never know. Seeing as how the star player is being treated like everyone else, might help unite the team. I don’t really think its going to make a difference with Smith, as he seems to be a hotheaded little guy with a short fuse. This isn’t the first time something like this has happened, as he also punched someone else in the face during film session. Man that guy must have REALLY ticked off Smith to get clocked during a film session.

Smith: ‘I was wide open up the seams’
Player: ‘No you weren’t, don’t you see the two guys right there, are you blind?’
Smith: ‘WHAT YOU SAY TO ME? GRRRRRRRR!!!!!
Player: YOU HEARD ME!!

**Smith goes off and hits player**

I personally wouldn’t have suspended Smith for two games given his importance to the team, but I do feel like they sent a message with this suspension. I wouldn’t be surprised if this ends up being the turning point of the Panthers season. Considering John Fox has a lot on the line this season, this is ballsy. Apparently he isn’t concerned about saving his job, he is concerned about this year’s team. Eric Mangini should take notes.